Operating against a stiff wind, Nebraska racked up 21 points and 200-plus yards in the first quarter en route to a 35-10 win at Minnesota.

Johnny Rodgers got the Huskers going with a six-yard run early in the first quarter to cap a 77-yard drive, but Ernie Cook’s 45-yard run pulled Minnesota even, 7-7, midway into the period.

Nebraska stormed back to retake the lead, marching 80 yards in 11 plays, with Jeff Kinney going the last two yards.

The Huskers made it 21-7 late in the first quarter when Guy Ingles, all alone in the end zone, took a 14-yard “dying quail” pass from I-back Joe Orduna. That score was set up by Joe Blahak’s recovery of a fumbled kickoff on the Gophers’ 34.

The Huskers drove 60 and 59 yards for touchdowns in the second and fourth quarters. Nebraska finished with 406 yards of total offense on 90 plays.

Minnesota coach Murray Warmath said Nebraska “took the ball and rammed it down our throat. It didn’t make much difference whether they went inside, outside or in the air.”

Having now lost to Missouri and Nebraska by similar scores, Warmath declined to handicap the Husker-Tiger showdown that was on tap the following Saturday. “I have a definite opinion on which team is better,” he said, “but I’m not saying.” 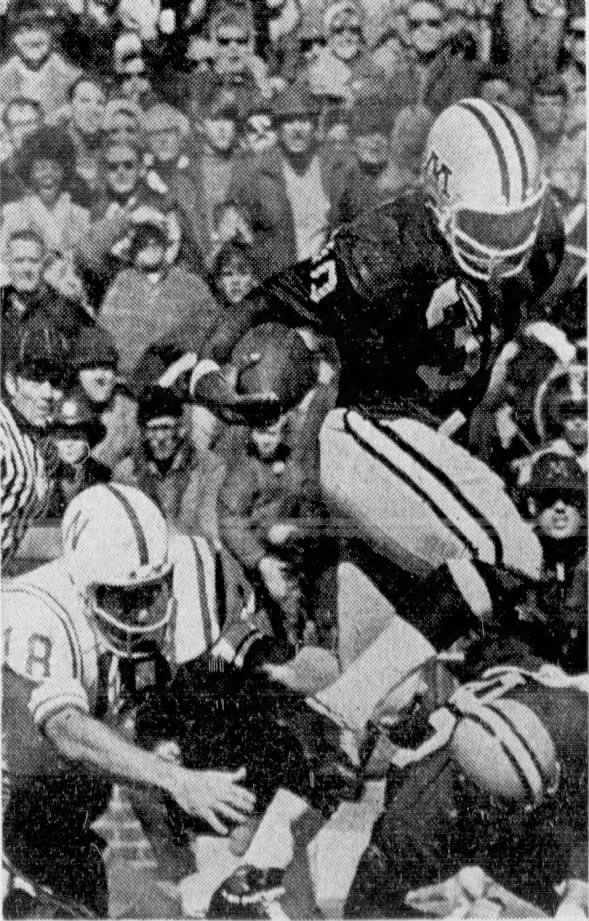 Ernie Cook gets away from Jim Anderson during his 45-yard TD run. · Chicago Tribune · Newspapers.com