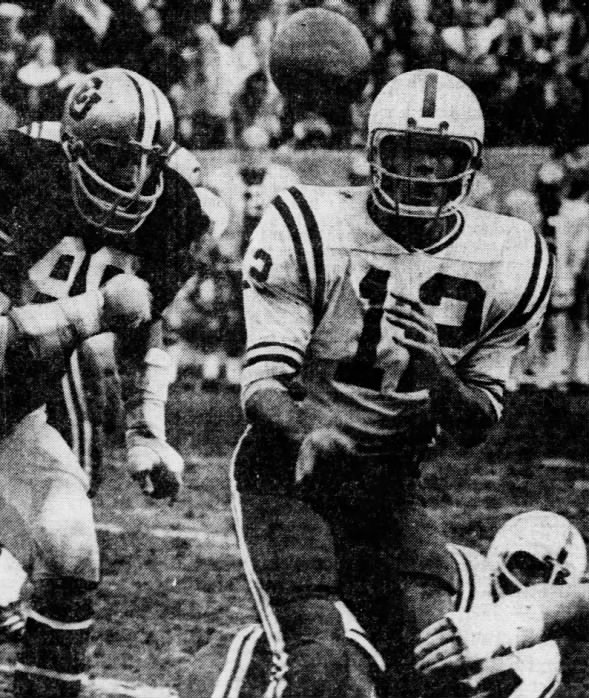 Van Brownson gets a pass away as Colorado’s Carl Taibi closes in. · Philadelphia Inquirer · Newspapers.com

A record crowd of 50,881 and a near-nationwide ABC-TV audience saw the favored Huskers pop the rugged Buffs.

Nebraska grabbed a 12-0 first-quarter lead on two long Van Brownson-to-Guy Ingles TD passes but had to settle for a 12-7 halftime margin. Paul Rogers’ 46-yard field goal made it 15-7 in the third quarter.

Then Colorado ripped back to pull up 15-13 but missed a two-pointer that would have tied the score with 11:22 left in the game. But it was all Nebraska from then on, as Jeff Kinney returned the ensuing kickoff 79 yards to set up a touchdown, and Larry Jacobson recovered a Cliff Branch fumble at the CU 40 to set up another.

H’MAX NOTES: Ingles’ TD catches capped drives of 68 and 79 yards. … Kinney credited Dan Schneiss with providing a key block on his pivotal kickoff return. … CU surprised Nebraska by using speedy receiver Cliff Branch as a wingback. He averaged more than 10 yards per carry. … Colorado marched 93 yards for its first TD, with Branch and Jon Keyworth doing most of the damage on the ground. … Larry Jacobson’s tackle of Branch at the goal line kept the Buffs from tying the game 15-15 on CU’s two-point try early in the fourth quarter. … Will Grimsley of the Associated Press had predicted a 27-20 CU upset. … The crowd included an estimated 15,000 Husker fans.