After squandering two touchdown opportunities in the first quarter, unbeaten Nebraska got the hint that underdog Oklahoma was not going to go away quietly.

Sure enough, the outcome wasn’t decided until the final play, when Husker defensive back Jim Anderson picked off Jack Mildren’s heave aimed for Jon Harrison in the end zone. A nerve-wracking 28-21 win was in the books, and Nebraska’s outside shot at its first national championship remained alive.

The 9-0-1 Huskers entered the game ranked No. 3 in the nation and were heavily favored against the Sooners, unranked at 6-3. But this was an improving OU squad, getting more familiar week by week with the wishbone offense that coach Chuck Fairbanks installed six games earlier.

Twice the Huskers trailed, and twice they rallied to tie the score, at 7-7 and 14-14. Not until the game was nearly two-thirds over did Nebraska grab its first lead, 21-14. That advantage soon vanished when a Sooner touchdown in the opening moments of the fourth quarter made it 21-21.

With the season on the line, Nebraska’s Jerry Tagge engineered the game-winning drive. It was a 53-yard march, and the junior quarterback kept it alive with a pair of crucial third-down passes. The first went for 14 yards to end Jerry List. The other was good for 24 yards to fullback Dan Schneiss, whose fingertip grab over the middle in traffic gave NU a first-and-goal at the OU three. Two plays later, Tagge scored from a yard out to make it 28-21 with 7:42 remaining.

This time, the Sooners couldn’t answer, and Nebraska appeared ready to salt the game away when Husker placekicker Paul Rogers lined up for 37-yard field goal try with 1:25 left. But the kick sailed wide right, setting the stage for the game-ending drama. 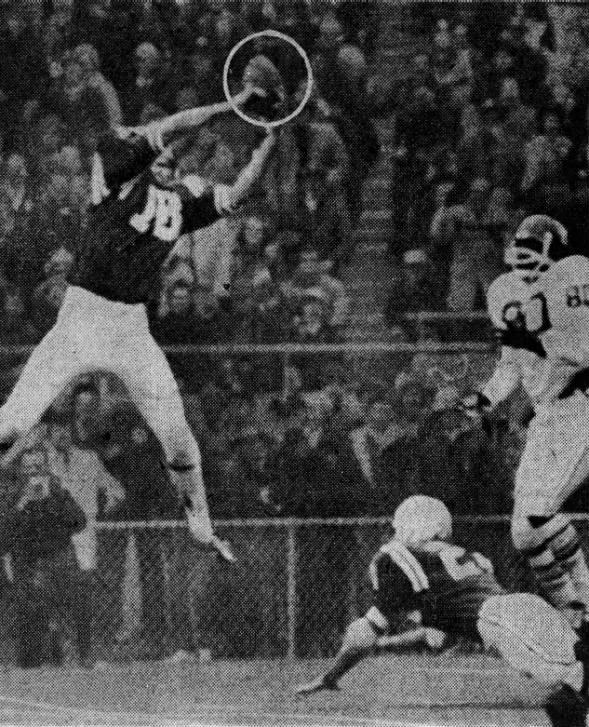 In a preview of the game’s final play, Jim Anderson’s leaping interception ends a Sooner threat in the first half. · Ft. Lauderdale News · Newspapers.com