Nebraska’s Cornhuskers, stunned by a sudden Jayhawk surge, had to fight from behind to thrash Kansas, 41-20, before 50,000 noisy fans.

Husker Dave Morock intercepted a Jayhawk pass on the second play of the game and in four plays Nebraska led, 7-0. Late in the first quarter, Paul Rogers kicked a 28-yard field goal and it looked like a cakewalk.

Then Kansas ran wild for 20 points in less than seven minutes and Nebraska was down 20-10. Vince O’Neill ignited the Hawks with a 96-yard kickoff return, while John Riggins and Dan Heck each scored to give KU upset hopes with 9:28 left in the half.

But Nebraska rose to the challenge and had the Jayhawks reeling by halftime — Van Brownson hit Guy Ingles with an 80-yard TD pass to get NU rolling and the Big Red added a 73-yard drive to take a 24-20 lead at halftime.

Nebraska added two TDs and another field goal in the second half to wrap up the Huskers’ second Big 8 win and a 5-0-1 season mark.

H’MAX NOTES: Riggins’ touchdown followed KU’s recovery of an onside kick on the Nebraska 43. … Heck’s touchdown capped a 68-yard KU drive. … All of Kansas’ scoring occurred in a span of 6:41. 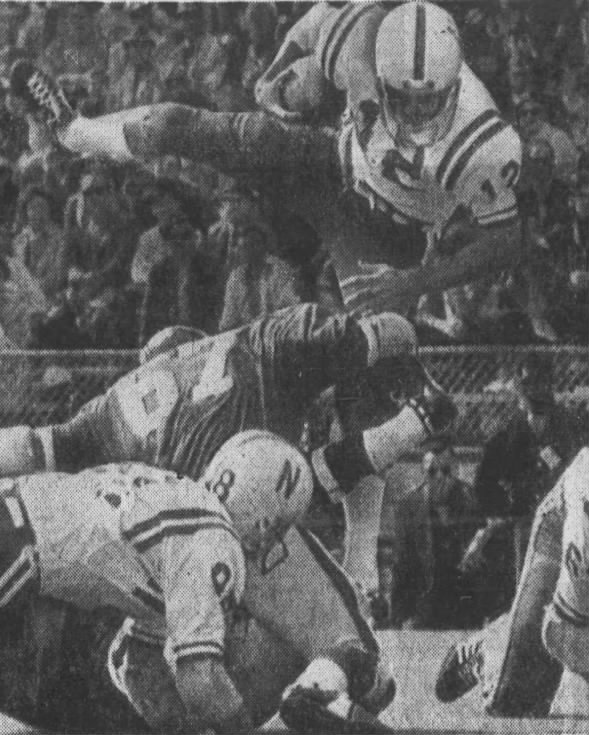