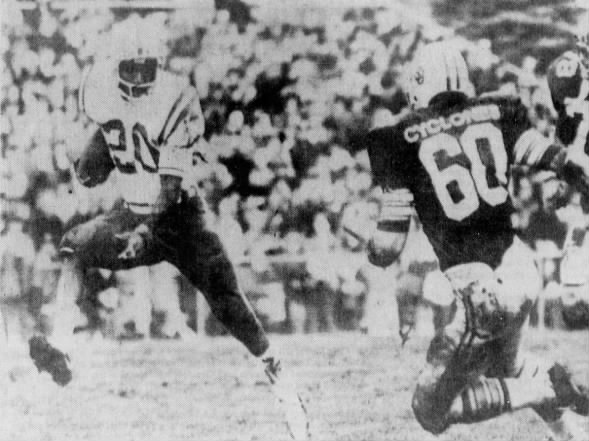 Nebraska's hopes for a third straight national title were dashed and Husker plans for at least a tie for the Big 8 title were given a frustrating jolt by the Iowa State Cyclones, who battled furiously for a 23-23 tie. And the Cyclones blew the extra point with 23 seconds left in the game or they could have hung loss No. 2 on the Huskers.

It was Nebraska's poorest showing of the season as the Huskers lost six fumbles and had two interceptions on the muddy turf of Clyde Williams Field. The fired-up Cyclones did a great job of capitalizing on Husker miscues and refused to fold even when Nebraska took a 23-17 lead with 1:03 left in the game.

George Amundson passed the Cyclones the length of the field, then with 23 seconds left hit Willie Jones* in the end zone for the tying touchdown. However, Cyclone victory chances went a-glimmering when Tom Goedjen blew the extra point under a heavy Husker rush.

Nebraska used a pass interception by Steve Manstedt and six plays to take a 7-0 lead in the first quarter, but Amundson countered with an 8-yard TD strike to Keith Krepfle in the second quarter to tie the score. Iowa State then took a 10-7 read with a 46-yard Goedjen field goal, before Nebraska drove 80-yards to go ahead, 13-10, at halftime.

Amundson hit his second TD pass in the third quarter to give Iowa State a 17-13 bulge, but the Huskers countered with a Joe Blahak interception and rolled 89-yards to score on a 35-yard bomb from Dave Humm to Johnny Rodgers. With 1:03 left, Rich Sanger kicked a 37-yard field goal, and it looked victory and a Big 8 title clinched.

But the stubborn Cyclones battled back for a stunning tie, triggering a wild celebration by the record throng of 36,231.