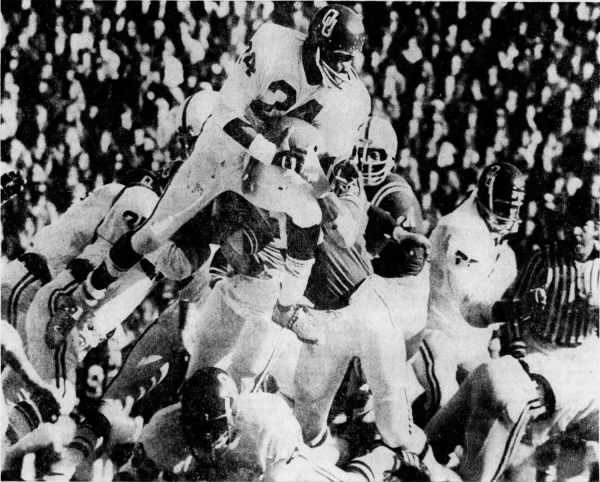 Oklahoma spotted Nebraska 14 points, then roared back in the final quarter to pull out a 17-14 victory and spoil Nebraska’s bid for a fourth straight Big 8 title.

With a record crowd of 76,587 Thanksgiving Day celebrants on hand, Nebraska found the going mighty tough against the fired-up Sooners. But the Cornhuskers capitalized on an early Sooner miscue – a fumbled punt – and ripped 49 yards to score in the first quarter.

Bill Olds tore through a draw-play hole for the final 14 yards of the nine-play drive, and Nebraska was on top, 7-0, with 7:32 left in the quarter. That held up until the third quarter when Joe Wylie fumbled another punt at the Sooner 40. Six plays later, Dave Goeller leaped over the pile to score, and Nebraska led 14-0 with 6:45 left in the third period.

Oklahoma retaliated by driving 76 yards in 11 plays to pull up 7-14. Key plays were two passes by Dave Robertson to Al Chandler and Tinker Owens to keep the Sooners rolling. Joe Washington got the ice-breaker for OU with a one-yard run on fourth down.

Early in the fourth quarter, the Sooners got possession at the NU 36 on a punt, and six plays later it was all tied up, 14-14, with 11:45 left in the game. A 22-yard Robertson pass to Owens and a pass-interference call in the end zone set up the tying score, punched in by Grant Burget from the one.

The Sooners’ defense then forced Dave Humm to fumble with 10:07 left, and OU had its chance. Three tries from the NU 27 netted only two yards, but on fourth down Rick Fulcher kicked a 41-yard field goal for the winning points.

It was Nebraska’s first loss at home since 1969, only the Huskers’ second loss anywhere in three years and the first Husker loss ever on artificial turf.