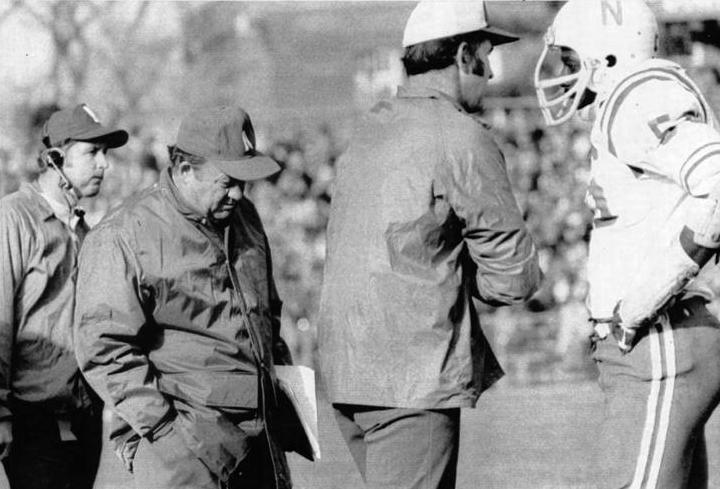 The tie meant Bob Devaney’s 100th win at Nebraska would have to wait another week.

Nebraska’s hopes for a third straight national title were dashed and Husker plans for at least a tie for the Big 8 title were given a frustrating jolt by the Iowa State Cyclones, who battled furiously for a 23-23 tie. And the Cyclones blew the extra point with 23 seconds left in the game or they could have hung loss No. 2 on the Huskers.

It was Nebraska’s poorest showing of the season as the Huskers lost six fumbles and had two interceptions on the muddy turf of Clyde Williams Field. The fired-up Cyclones capitalized on Husker miscues and refused to fold even when Nebraska took a 23-17 lead with 1:03 left in the game.

George Amundson passed the Cyclones the length of the field, then with 23 seconds left hit Willie Jones in the end zone for the tying touchdown. However, Tom Goedjen missed the extra point under a heavy Husker rush.

Nebraska used a pass interception by Steve Manstedt and six plays to take a 7-0 lead in the first quarter, but Amundson countered with an 8-yard TD strike to Keith Krepfle in the second quarter to tie the score. Iowa State then took a 10-7 read with a 46-yard Goedjen field goal, before Nebraska drove 80 yards to go ahead, 13-10, at halftime.

Amundson hit his second TD pass in the third quarter to give Iowa State a 17-13 bulge, but the Huskers countered with a Joe Blahak interception and rolled 89 yards to score on a 35-yard bomb from Dave Humm to Johnny Rodgers. With 1:03 left, Rich Sanger kicked a 37-yard field goal, and it looked like victory and a Big 8 title were clinched.

But the stubborn Cyclones battled back for a stunning tie, triggering a wild celebration by the record throng of 36,231.