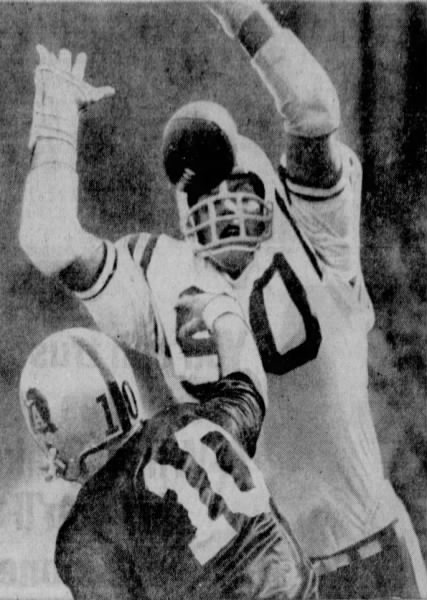 Army’s Kingsley Fink gets a pass away under heavy pressure from John Dutton. The San Francisco Examiner Newspapers.com

Army no match for Huskers

Nebraska’s Cornhuskers completely overwhelmed Army, 77-7, before a sellout crowd of 42,239 at Michie Stadium and millions watching on ABC-TV’s regional telecast.

The Cornhuskers scored two TDs in the first quarter, added three in the second, four in the third and two in the fourth before Army finally scored with 35 seconds left in the game. All 49 of Nebraska’s players saw action, with the reserves taking over midway in the third quarter. The 77 points were the most scored in the nation in 1972.

Johnny Rodgers scored three touchdowns, while Dave Goeller and Steve Runty each scored twice. Dave Humm set a Nebraska and Big 8 percentage record when he hit 14 of 18 passes for 160 yards.

As might be expected, Nebraska dominated the total offense statistics, 481 yards to 124. The Husker Black Shirts held Army to minus 12 yards rushing.