Led by sophomore I-back Tony Davis and junior middle guard John Bell, the second-string Whites upset the varsity Reds, 21-19, on this cold, rainy, wind-swept day. Davis topped all rushers with 67 yards and Bell led a determined White defensive effort which shut off the Reds after the first quarter.

The Reds had started off in high gear by scoring two first-quarter touchdowns for a 13-0 lead. Bill Olds picked up the first one when he raced 23 yards untouched with 11:45 left-it was his only carry of the first half. With 1:48 left, junior Dave Goeller punched into the end zone from three yards out and the varsity appeared to be rolling.

However, Whites quarterback Dana Potter used Davis and Don Westbrook effectively and completed some timely passes to bring his team back. Westbrook scored from the three with 9:41 left in the half, then Davis scored from two yards out with 5:35 to go. Al Pieratt kicked both PAT’s and the Whites held a surprising halftime lead, 14-13.

With 4:26 left in the third quarter, Davis picked up his second TD on another two-yard plunge, Mark Okla booted the extra point and the Whites were out to a 21-13 lead. The Reds scored late in the game on a one-yard plunge by Olds, but a PAT pass which would have tied the game, was just off the mark. 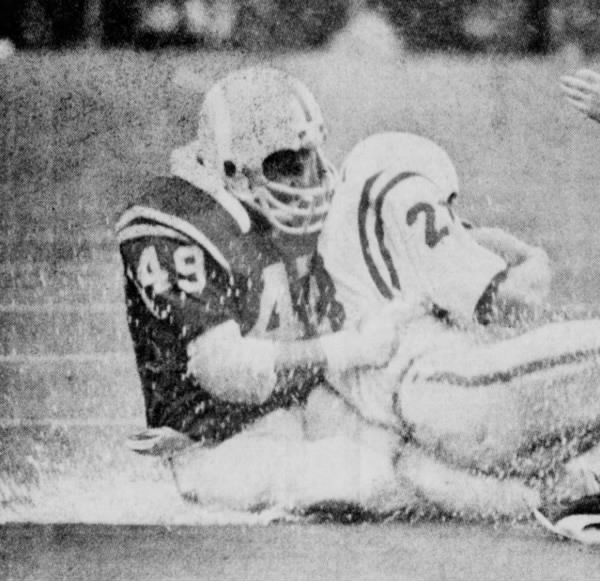 Jon Strong makes a splash with his tackle of Ritch Bahe. The Lincoln Star Newspapers.com