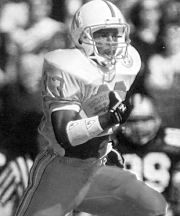 It was a record-setting day for Tyrone Hughes, who had 247 kick-return yards.

For the second straight week, Nebraska struggled through the first half before righting itself and pulling away, this time for a 45-8 win over Kansas State in the Big Eight opener.

Playing on the road for the first time in 1990, eighth-ranked (AP) NU faced a greatly-improved K-State team that had won three of its four nonconference games and had already scored more points (152) than the 1989 Wildcats had in a whole season (134).

The Wildcats throttled the Husker offense in the first 28 minutes and appeared to be heading for the locker room trailing just 3-2. However, Nebraska worked the two-minute drill to perfection, driving 81 yards in 11 plays, and went up 10-2 on a 5-yard Mike Grant-to-Jon Bostick touchdown pass with 11 seconds left in the half.

Nebraska’s Blackshirt defense played another outstanding game, limiting K-State to 159 total-offense yards and keeping a third opponent out of the end zone. Tackles Kenny Walker and Joe Sims spent much of the afternoon in the Wildcat backfield, as they combined for 17 tackles, six of them behind the line for 29 yards lost, and five of those sacks for 25 yards lost. Sims also had an interception behind the line.

Sophomore wingback Tyrone Hughes led the charge as he returned eight total kicks 247 yards, tying the NCAA Division I-A record for kick-return yards set by Brigham Young’s Golden Richards against North Texas State in 1971. Hughes, who would later be named Big Eight offensive player-of-the-week, returned three kickoffs 153 yards to break the old school record of 140 set by Bob Smith at Missouri in 1951. He capped the day by applying the coup de grace to the Wildcats with a 99-yard kickoff return touchdown with 3:52 left. It was the first kickoff-return touchdown by a Husker in five years and the longest for NU in 41 seasons. Hughes also had a career-long 66-yard punt return, which set up the Huskers’ first-period field goal.

However, another slow start, one in which the Huskers managed one field goal in their first six possessions, left Osborne feeling frustrated.

“I know it sounds crazy to score 45 points and be mad, but I’m not happy,” he said. “We kept Kansas State from its 45-point average and didn’t give them big plays. We won the kicking game, and without a couple of plays, we would have won by 10 or 14 points.

“We’re not operating as a unit on offense,” he continued. “Right now, we’ve got to worry about winning. We can’t worry about beating people bad.”

Junior Wingback Nate Turner agreed: “We didn’t come out and play like we should have early in the game. To win the big games, we’ve got to start kicking it in gear a lot earlier.”

Nebraska raised its record to 5-0 while Kansas State fell to 3-2.