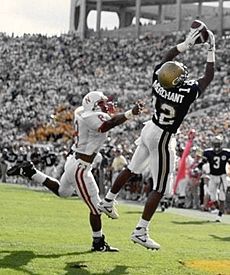 Despite a second-quarter rally, Nebraska was unable to overcome a 21-0 deficit as the Huskers fell to undefeated Georgia Tech, 45-21, in the Florida Citrus Bowl. The Yellow Jackets finished 11-0-1 with the victory and edged Colorado for the UPI national title, while the Buffaloes, who had beaten NU, 27-12, in November, claimed the AP crown.

Two freshmen gave Husker fans a ray of hope after Tech took its three-TD lead. All-Big Eight tight end Johnny Mitchell hauled in a 30-yard TD pass from Tom Haase, then I-back Derek Brown sprinted 50 yards to cut the margin to 21-14 with 5:07 left in the half. But that was as close as Nebraska would get, and runningback William Bell’s two fourth-quarter TDs sealed the Huskers’ fate.

Mitchell finished the game with five receptions for an NU bowl-record 138 yards, while Brown rushed for 99 yards, and Haase came off the bench to complete 14 of 21 passes for 209 yards and two TDs. 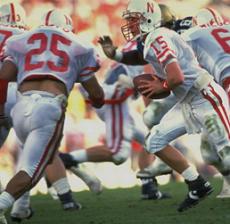 Tom Haase took over at quarterback early in the second quarter.