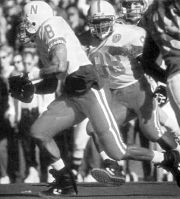 Tyrone Byrd runs with the ball after picking off a Chris Pedersen pass.

After being stung twice early by Iowa State, fourth-ranked Nebraska went to its ground attack on a mild but blustery day and pulled away for a 45-13 win before a record Cyclone Stadium crowd of 54,475.

The win upped the Huskers to 8-0 on the season and 4-0 in Big Eight play, while the Cyclones dropped to 3-4-1 and 1-2-1. Iowa State took a 7-0 lead on the third play of the game when quarterback Chris Pedersen connected with a wide-open Brandon Hughes on a 64-yard touchdown pass. Nebraska then moved from its 11 to the Cyclone 21, but the drive stalled and Gregg Barrios pulled NU within 7-3 with a 37-yard field goal.

On the next possession, ISU drove from its 24 to the Husker 8, but stalled and Jeff Shudak gave the home team a 10-3 lead with a 26-yard field goal with 2:40 left in the half.

After that, though, the Huskers put it together on both sides of the ball, scored five unanswered touchdowns, and put the game away by building a 38-10 lead at the end of three quarters.

I-back Leodis Flowers and quarterback Mickey Joseph did the most damage, as Rowers enjoyed the best day of his career, rushing for 208 yards and three touchdowns on 25 carries, including the longest run of his career – a 70-yard touchdown sprint on the third play of the second half. It was his sixth-straight game over the 100-yard mark, equaling the third longest string of 100-yard games in Nebraska annals.

Joseph also had the best statistical day of his career, rushing for a career-high 123 yards on eight carries, including a career-long 70-yard run to the Cyclone 18 to set up a third-period touchdown. And, while he didn’t throw often, he was perfect when he did, completing four of four for 67 yards and two touchdowns, both to freshman tight end Johnny Mitchell – the first a finger-tip catch and tackle-breaking run to give the Huskers the lead for good at 17-10 with 38 seconds left in the first half.

The two juniors led Nebraska to 624 total-offense yards, including 557 on the ground, both season highs. Meanwhile, NU’s Blackshirt defense bounced back from its early problems to shut down Iowa State’s more-than-respectable offense. The Huskers gave up 132 total-offense yards and seven first downs on the Cyclones’ first two drives, but just 185 yards and six first downs over the last three quarters.

“The first touchdown was a fluky kind of pass,” said Husker defensive tackle Joe Sims. “It was a windblown touchdown. The second time they scored, we got to yelling at each other because we weren’t stopping them. Then, we picked it up, the offense picked it up, and we got down to business.”