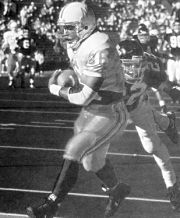 Johnny Mitchell had three receptions for 108 yards and two touchdowns.

It took Nebraska most of the first half to get past the previous week’s loss to Colorado, and when the Huskers finally did, they rolled to a 41-9 win over Kansas.

Out of the Associated Press top 10 for the first time in 67 games, the 13-ranked Huskers raised their record to 9-1 and extended both their NCAA-record string of nine-win seasons and their win string over the 3-6-1 Jayhawks to 22.

“The first-half score was done with mirrors,” Osborne said. “We did not dominate the line – Kansas did more of that than we did. We primarily got our scores after they missed an onside kick and when the coverage broke on (tight end Johnny) Mitchell. Other than that, we didn’t do much.”

Nebraska managed just one first down on its first two offensive possessions, then Kansas put together an 11-play, 46-yard drive to take a 3-0 lead on a 26-yard Dan Eichloff field goal with 3:16 left in the first period.

Eichloff then gave NU its first gift on the ensuing kickoff when his onside kick sailed out of bounds at the Kansas 41. The Huskers moved to the Jayhawk 35 in three plays, and decided to go for it on fourth down. The KU defense lost track of Mitchell, and the freshman hauled in a 35-yard TD strike from Mickey Joseph for a 7-3 Nebraska lead with 2:28 left in the first period.

It was the fifth straight game in which Mitchell had caught a touchdown pass, the longest streak for a Husker since Johnny Rodgers’ five-game string in his Heisman Trophy-winning 1972 season, and one off Rodger’s record of six in 1971.

Kansas threatened again midway in the second period. Starting at their 22, the Jayhawks picked up 54 yards on their first two plays on a 23-yard pass from Chip Hilleary to Dwayne Chandler and a 31-yard run by Chaka Johnson, but the drive stalled at the NU 19, where the Huskers got another break as Eichloff missed a 36-yard field goal. The freshman had hit 14 of 17 field goals in KU’s first nine games, and was nine-of-nine inside 40 yards.

Moments later, the Jayhawk defense once again lost track of Mitchell and the 6-foot-5, 250-pounder hauled in a 45-yard pass from Joseph which carried to the KU 23. The Huskers couldn’t capitalize, however, and had to settle for a 30-yard Gregg Barrios field goal for a 10-3 lead with 6:10 left in the half. Kansas came right back and drove from its 26 to the Husker 22, but Nebraska got another break when Eichloff missed a 39-yard field-goal attempt with 1:29 left.

The Huskers, hoping merely to get in field-goal range in the closing seconds, did just that as I-back Scott Baldwin picked up 22 yards to the NU 43 on third-and-10, then Joseph hit Wingback Nate Turner for 29 yards to the Jayhawks 28 on the next play. Once again, Mitchell beat the Jayhawk defense and Joseph found him with a 28-yard TD pass with 11 seconds left on the clock.

Nebraska got off to a quick start in the second half, as Baldwin scored on a 67-yard run on the Huskers’ first play, then went on to finish with a career-high 170 yards and two TDs in his first career start (replacing the injured Leodis Flowers).

Barrios added a field goal for a 27-3 lead late in the third period, his 13th of the year, tying the school record. After Kansas pulled within 27-9 on a Hilleary-to-Pete Vang TD pass in the fourth quarter, the Huskers pulled away with TD runs by Baldwin and George Achola, and the PATs Barrios added afterwards upped his 1990 point total to 83, the NU record for kickers.

Joseph enjoyed the best day of his career as a passer, hitting seven of 16 for 164 yards, two TDs and no interceptions. Kansas finished with 21 first downs and 410 total-offense yards, the most against Nebraska in 1990.