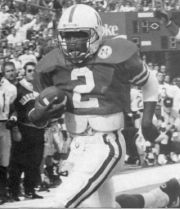 Junior quarterback Mickey Joseph ran for four touchdowns and passed for another as he led a Nebraska option offense that demolished Missouri, 69-21, in the Cornhuskers’ 80th Homecoming game.

Making his third start of the season, and his first when Mike Grant wasn’t injured, Joseph led the seventh-ranked (AP) Huskers to touchdowns on their first five possessions, a field goal on their sixth, and 11 scores in the first 13 possessions.

Nebraska finished with 33 first downs, 622 total-offense yards and 500 rushing yards against a team that had beaten then-21st-ranked Arizona State, 30-9, two weeks earlier, then had lost to 12th-ranked Colorado, 33-31, only when the Buffaloes scored the winning touchdown on fifth down on the final play of the game. The Huskers went to 6-0 overall and 2-0 in the conference. Mizzou fell to 2-4 and 0-2.

Joseph ran for 95 yards on nine attempts, and completed four of eight passes for 65 yards and a touchdown – but threw two interceptions. His four rushing touchdowns equaled the most ever scored by an individual against Missouri, and tied the NU school record for quarterbacks. The effort earned him Big Eight offensive player-of-the-week for the second time in 1990.

“I think Mickey Joseph’s performance was spectacular,” said Missouri Coach Bob Stull. “You look at some of the incredible plays that he made. Not the average ones – he made some great plays. On some plays, we seemingly had him stopped, and all of a sudden, ‘boom’, he came out of it or pitched it late.”

Nevertheless, the Marrero, La., native and his coach, Tom Osborne, weren’t totally satisfied with his performance, particularly with the interceptions.

“I thought Mickey played very well up until about the middle of the third quarter, but the wheels came off there a little,” Osborne said.

“When I got out of the play a bit in the third quarter, that’s when I threw an interception,” Joseph said. “It could have been Mike Grant or anybody else at quarterback because we have the offense. It’s the team that gets it all done.”

Nebraska also got standout performances from I-back Leodis Flowers and guard Jim Wanek. Flowers became the first Husker in six years to have four-straight 100-yard rushing performances, finishing with 111 yards and a touchdown on 16 carries, while the 245-pound Wanek was credited with neutralizing 317-pound Missouri defensive tackle Mario Johnson.

Senior strong safety Reggie Cooper had six total tackles to increase his career total to 159 and break the old Nebraska defensive backs record for career tackles of 153 which he had shared with All-American Larry Wachholtz (1964-66).