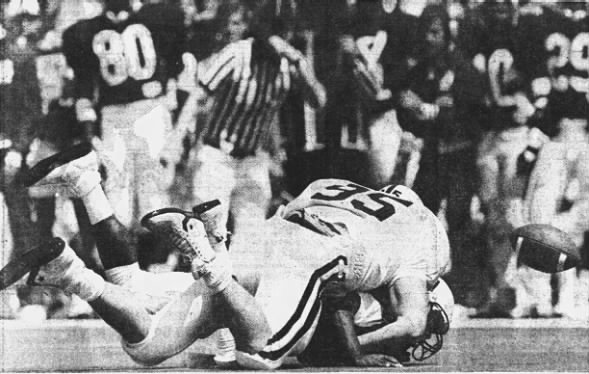 No. 1 defense comes up big in spring finale

The No. 1 defense scored two touchdowns and forced five turnovers as the Reds beat the Whites, 44-34, in the Nebraska football spring game.

It was a ragged first quarter, featuring nine fumbles, two interceptions and five penalties. Six possessions into the contest, the first-team defense had outscored the first-team offense, 7-3.

“We had a lot of mistakes early,” coach Tom Osborne said. “But overall it was a good final game.”

The Reds’ Mike Grant and Mickey Joseph combined to complete 13 of 22 passes for 215 yards, two touchdowns and no interceptions. Osborne said the two quarterbacks might be used interchangeably in the fall.

Splitting his time on the Red and White squads, I-back Scott Baldwin was the game’s leading rusher, with 115 yards on 16 carries.

Twenty-minute quarters were played in the first half, contributing to the hefty total of 166 plays run by the two offenses.

Senior kicker Gregg Barrios was the game’s leading scorer with 14 points. He connected on all three of his field goal attempts and was 5-for-5 on PATs. Osborne wasn’t pleased with other aspects of the kicking game, particularly the lack of touchbacks on kickoffs and the overall punting average of 34 yards.