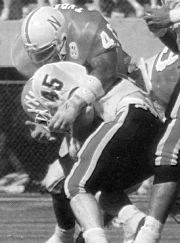 After being held to just 13 points and one touchdown by Baylor in the opener the week before, Nebraska’s offense exploded for eight touchdowns against Northern Illinois in blasting the Huskies, 60-14.

The 10th-ranked (AP) Cornhuskers upped their record to 2-0 and spread the wealth around, as seven different players got into the NIU end zone, including four who scored their first career touchdowns – fullbacks Omar Soto, Tim Johnk and Robert Glantz, and freshman I-back Derek Brown, who scored on a 1-yard run on his first career carry early in the fourth quarter, then outran the Huskie defense on a 59-yard sprint moments later.

The Huskers, however, had a game on their hands for nearly three quarters, despite the onesided final. Nebraska didn’t let NIU forge a halftime tie, as had happened in 1989 (17-17), but the Huskies threatened to do just as well, if not better.

NU jumped to a 16-0 lead in the first 10 minutes on a 1-yard touchdown run by quarterback Mickey Joseph, a safety, and a 20-yard Joseph-to-Chris Garrett TD pass. But Northern Illinois, 1-1 and coached by former Nebraska assistant Jerry Pettibone, bounced right back as fullback Adam Dach got the Huskies on the board with a 48-yard touchdown run. Quarterback Stacey Robinson ran for a 2-point conversion, then engineered an 11-play, 59-yard drive that ended in a 42-yard John Ivanic field goal, cutting Nebraska’s lead to a precarious 16-11 with 9:33 before halftime. The field goal also made Ivanic NIU’s all-time leading scorer at 205 career points.

After that, though, it was almost all Nebraska. The Huskers scored 10 points in the final three minutes of the half to go up 26-11, and, after Ivanic cut it to 26-14 early in the second half, NU ran off 34 unanswered points in the game’s final 21 minutes.

The only second-half mishap for the Huskers came with 5:29 left in the third period, when place-kicker Gregg Barrios had a PAT kick blocked, ending his school-record string of 82 in a row.

“I was pleased with the final result,” said Coach Tom Osborne. “At times during the day, we probably didn’t play real well. You think 60-14 would be real good, and the final outcome was pleasing, but when their good people were going against our good people, at times they moved the ball with some consistency.”

Flowers ran for a career-high 124 yards on 21 carries, and Joseph, who was making his first career start, replacing Mike Grant (bruised knee), more than doubled his career passing yardage, hitting on four of 11 for 103 yards and the touchdown to Garrett. It was Garrett’s sixth career reception, his fifth for a touchdown.