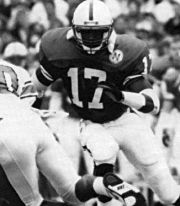 S-P-E-C-I-A-L. That’s what Nebraska’s special teams were as the fourth-ranked (AP) Huskers outscored Oklahoma State, 31-3, for their 19th-consecutive homefield win.

The determined Cowboys held NU to 315 total-offense yards in the game, and had pulled within 7-3 early in the second half on a 35-yard Cary Blanchard field goal. Then the Nebraska special teams struck, contributing 24 unanswered points, directly or indirectly, as the Huskers pulled away.

Tyrone Hughes started the onslaught with a 40-yard kickoff return to the Oklahoma State 45, setting up a four-play drive to a 31-yard Gregg Barrios field goal.

The Husker defense then stopped Oklahoma State without a first down, and Hughes returned a punt 19 yards to the Cowboy 39. On the next play, quarterback Mickey Joseph sprinted around left end on the longest run of his career, giving NU a 17-3 lead.

Late in the third quarter, the Cowboys fumbled a Nebraska punt and Husker linebacker Mike Anderson recovered at the OSU 32. Four plays later, Joseph hit tight end Johnny Mitchell with a 3-yard touchdown pass four seconds into the fourth quarter for a 24-3 lead.

On the ensuing kickoff, Oklahoma State again fumbled, and Nebraska’s Robert Hicks recovered in the end zone to give the Huskers their final 31-3 margin. The win left NU at 7-0 overall and 3-0 in the Big Eight. OSU fell to 2-5 and 0-3.

“The kicking game was probably the biggest difference,” said Husker Coach Tom Osborne. “That was really a big plus for us. I can really only remember one game this year where I didn’t feel we had a clear-cut plus in kicking. The rest have been very good.”

The reason, according to strong safety Reggie Cooper, is the kicking game is a priority for the Huskers.

“We’ve worked hard on the special teams more this year than we have in the past years I’ve been here,” Cooper said. “We have a lot of confidence in it. The coaches make sure we’re intense during the kicking game. Otherwise, we’ll be doing it all day.”

“We looked at Colorado’s season last year,” the Slidell, La., senior continued. “They had a real good season because of the kicking game. Heck, they beat us on two punt returns. We took that as a steppingstone to making our team better with the kicking game.”

Cooper and the Husker defense kept a fourth opponent out of the end zone, and held OSU to just 227 total-offense yards, while limiting Cowboy tail-back Gerald Hudson to 47 rushing yards on 17 carries. Hudson went on to lead the nation in rushing at 149.27 yards per game.

Cooper contributed with nine total tackles to increase his school defensive backs career record to 168. Four of the stops were unassisted, giving him 104 solos in his career to break the old defensive backs record of 101 set by Ail-American Bret Clark from 1982-84, and he opened the game by tackling OSU’s Vernon Brown for a 1-yard loss. It was the 16th behind-the-line tackle in Cooper’s career, tying the school position record set by Jim Pillen from 1976-78.

Defensive tackle Kenny Walker earned Big Eight conference defensive player-of-the-week honors for this career-high 12 tackles, including three unassisted stops. He also had a quarterback hurry, which resulted in an interception.

I-back Leodis Flowers sparkled on offense, running for 138 yards and the game’s first touchdown. It was the Omaha junior’s fifth-straight 100 yard game, the longest such string for the Huskers since Heisman winner Mike Rozier’s record 11-straight in 1983.

The win was Nebraska’s 17th-straight over Oklahoma State as the Huskers remained unbeaten against the Cowboys since 1961.