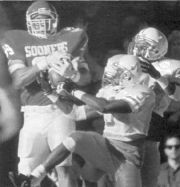 Tyrone Legette battles a Sooner for a pass.

All in all, Nebraska’s 45-10 loss to unranked Oklahoma may have been the worst afternoon in the modern history of Cornhusker football.

The 10th-ranked (AP) Huskers went into the nationally televised game (CBS) on the day after Thanksgiving as the nation’s top rushing team at 362.2 yards per game and needed just 170 yards to win a third-straight NCAA title. NU managed a season-low 118, to go with season lows of 10 points and 229 total-offense yards. I-back Leodis Flowers was held to 13 rushing yards on nine carries, and came up 60 yards short of a 1,000 yard season.

The Huskers went into the game ranked third in the NCAA in scoring defense (10.2 points per game) and sixth in total defense (250.2 yards per game), but yielded their most points in 22 years (the seventh-most ever) and gave up 396 total-offense yards. NU had given up just 18 turnovers, including a mere four interceptions, in its first nine games, but turned the ball over to the Sooners eight times, including four interceptions, each figure one under the school single-game records.

“I have to say it was one of our poorer performances in my 28 years at Nebraska,” Husker Coach Tom Osborne said. “I’m totally embarrassed. I have to take the blame for that performance.”

Adding to the Huskers’ gloom was the loss of starting quarterback Mickey Joseph six minutes into the game. The junior had just picked up 13 yards on third-and-8 from the NU 33, but was hit out of bounds on the Oklahoma sidelines at the end of the play, slid into an aluminum bench, and suffered a severe laceration to his lower right leg. His calf muscles were cut to the bone, and he required a one-and-a-half hour surgery that night in Lincoln to repair the damage.

The Huskers started well, taking a 3-0 lead on a 30-yard Gregg Barrios field goal with 2:24 left in the first quarter. It was his 14th field goal of the season, setting a school record, and made him the top kick scorer in NU history at 204 points, breaking the old record of 203 set by Rich Sanger from 1971-73. Barrios later added a PAT to finish with 205, the fourth-best overall total in Husker annals. He finished the season with a school-record 87 points via kicking.

After Barrios’ field goal, though, it was all Oklahoma as the Sooners scored three unanswered touchdowns to take a 21-3 halftime lead on a 36-yard pass from freshman quarterback Cale Gundy to Adrian Cooper, a 1-yard run by Gundy, and a 9-yard run by Mike McKinley.

Nebraska made one more effort to get back in the game right after the second-half kickoff. Linebacker Mike Croel forced a Gundy fumble on the second play of the half and cornerback Tyrone Legette pounced on it at the Sooner 35.

The Huskers took just five plays to score, the big play a 24-yard Mike Grant-to-Jon Bostick pass which carried to the Sooner 5 on third and 4. Two plays later, Flowers went over from the 2 to get the Huskers back within 21-10, but it was all downhill from there.

McKinley scored two more times on runs of 7 and 48 yards to give OU a 35-10 lead after three quarters, then Sooner strong safety Greg DeQuasie picked off a Grant pass on the second play of the fourth quarter and returned it 43 yards for a 42-10 lead. Sooner kicker R.D. Lashar then became the top kick scorer in Big Eight history (320 points) when he kicked a 24-yard field goal with nine seconds left.

The loss left Florida Citrus Bowl-bound Nebraska and Oklahoma tied for second at 5-2 in the final Big Eight standings. NU headed for Orlando at 9-2 overall, while the Sooners finished 8-3.