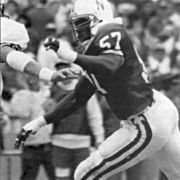 It wasn’t supposed to be this tough. Eighth-ranked (AP) Nebraska was a prohibitive favorite to demolish winless Oregon State, a team which had been outscored 142-50 by four previous opponents, none of which were top-25 candidates.

However, the Beavers, starting to get healthy after a rash of preseason injuries, held Nebraska to a field goal in the first half as they took a shocking 7-3 halftime lead and extended the Cornhuskers to the limit before finally falling, 31-7. NU upped its record to 4-0 and dropped OSU to 0-5.

Playing before the 172nd-consecutive sellout crowd in Memorial Stadium (76,061), OSU took advantage of a fumbled punt to drive 18 yards to the game’s first score, a 4-yard Matt Booher-to-Dwayne Owens pass with 7:35 left in the first quarter.

Later in the first period Nebraska drove to a first down at the OSU 11, helped by a 43-yard run by fullback Omar Soto, but the drive stalled on the five and the Huskers had to settle for a 22-yard Gregg Barrios field goal, then didn’t manage another first down until the final two minutes of the half.

“So much for 51-point spreads,” NU coach Tom Osborne said. “I told the team at halftime they were on the verge of the biggest embarrassment in the history of the school and possibly the biggest upset of the year if they didn’t get with it.”

The Huskers got with it in a hurry in the second half, taking the opening kickoff and driving 82 yards in three plays to take the lead for good.

Wingback Nate Turner, playing in his first game after coming back from a broken collarbone, started the half with an 11-yard reverse to the NU 29.I-back Leodis Flowers then broke free up the middle on a 66-yard sprint to the OSU 5, picking up the biggest chunk of his career-high 151 yards. After a 4-yard penalty for too many Beavers on the field moved the ball to the 1, Scott Baldwin went over the top for the score.

Another scoring opportunity went by the boards moments later on a fumble at the OSU 13, but Flowers and Baldwin each scored in the game’s last seven-and-a-half minutes to finally put the Beavers away.

For the second time in four games, it was the defense, led by tackle Kenny Walker, that saved the Huskers’ bacon, as the Beavers were limited to 133 total-offense yards in the game – 50 in the second half, 8 in the fourth quarter.

“We can talk until we’re blue in the face, but this is a good lesson,” said Charlie McBride, NU’s defensive coordinator. “We started out like we were playing bridge. The first series (when OSU drove from its 29 to the Nebraska 39) was the most disturbing of all. But after that, we played well. I thought our kids really played well in the second half.”

One bright spot throughout the game was the play of Walker, a 6-4, 240-pound senior from Crane, Texas, who spent most of the day in the Oregon State backfield. Of a team-high seven tackles, Walker had five behind the line for 33 yards lost, including four sacks for 29 yards. In addition, he had four hurries and two pass breakups.

Booher, the OSU quarterback, said he was glad to see the last of No. 57.

Nebraska suffered one serious injury in the game, when starting tight end Chris Garrett broke his left ankle in the first quarter, and was lost for the rest of the regular season.