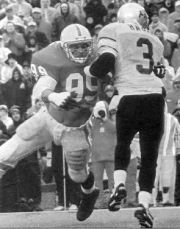 Colorado tailback Eric Bieniemy went from goat to hero in the fourth quarter as the ninth-ranked (Associated Press) Buffaloes erupted to knock off third-ranked Nebraska, 27-12, in the battle for the Big Eight Conference lead. Playing in wind-driven rain for most of the game, and in temperatures hovering under 40 degrees, Bieniemy fumbled five times in the first three periods, three of which were recovered by Nebraska.

The first lost fumble stopped a CU drive at the Husker 3 on the Buffs’ first possession, and the third ended another drive at the NU 20 in the third quarter. Five plays after that fumble, Husker quarterback Mickey Joseph found freshman tight end Johnny Mitchell wide open on a 46-yard touchdown pass that gave NU a 12-0 lead with 2:38 left in the third period.

It was then that Bieniemy made his transformation. In the game’s final 17 minutes, he picked up 75 of his game-high 137 rushing yards and scored touchdowns on each of Colorado’s next four possessions following the Husker TD, as the Buffs came from behind to win for the eighth time in an 8-1-1 season and hand Nebraska its first loss in nine games. CU went to 5-0 the conference and dropped the Huskers to 4-1.

Colorado also ended the Huskers’ 19-game home win string and won at NU’s Memorial Stadium for the first time since 1967, ending a 10-game losing streak in Lincoln. The Buffs’ 27 points in the fourth quarter were a record against NU, and the win virtually assured them of a return trip to the Orange Bowl, making them the first Big Eight team other than Nebraska or Oklahoma to make back-to-back Orange Bowl trips.

“At the end, I thought we’d be the stronger team,” NU Coach Tom Osborne said. “But they got their running game going, and we didn’t get it untracked. Once they got ahead, they made a couple of big plays and big catches and that was the difference.”

Nebraska took advantage of a short Colorado punt to take a 3-0 lead on a 26-yard Gregg Barrios field goal early in the second period, then went up 6-0 moments later on a 44-yard Barrios field goal following a Mike Petko interception at the CU 34.

That lead held up until halftime, then the Huskers missed a chance to get some breathing room early in the third quarter. On the third play after intermission, outside linebacker Travis Hill recovered a Bieniemy fumble at the Colorado 45, and, on the first play, Joseph kept around right end and sprinted all the way into the end zone but officials ruled he had stepped out of bounds at the 9.

Three running plays got the Huskers to the 3, but Barrios then missed a 20-yard field goal at a severe angle, and Nebraska came up empty.

Bieniemy finally got the Buffs on the board, capping a 71-yard drive with a 1-yard touchdown run on the third play of the fourth quarter, then put the Buffs up for good at 13-12 with a 2-yard plunge with 8:37 left in the game.

Colorado scored its last two touchdowns in the closing minutes after the Huskers missed on a pair of fourth-down conversions. The first was a fake punt on fourth and 3 at the NU 28, when reserve fullback Tim Johnk was stopped a yard short, and five plays later, Bieniemy scored from the 3 to give CU a 20-12 lead with 4:35 to go.