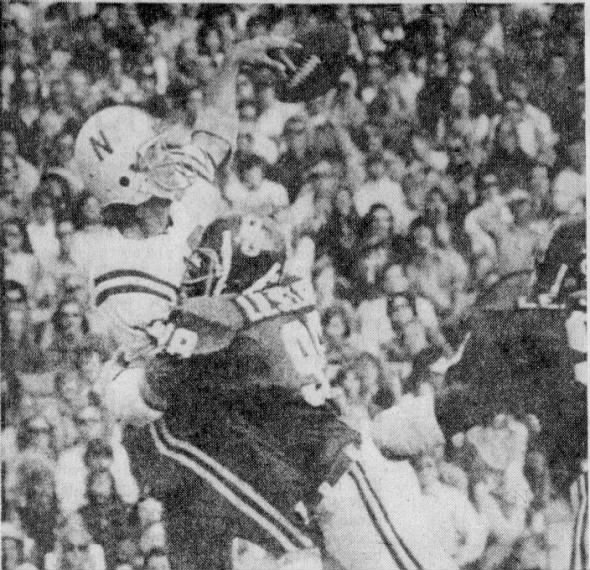 Dave Humm barely gets a pass away under pressure from OU’s Lucious Selmon. · The Fresno (Calif.) Bee · Newspapers.com 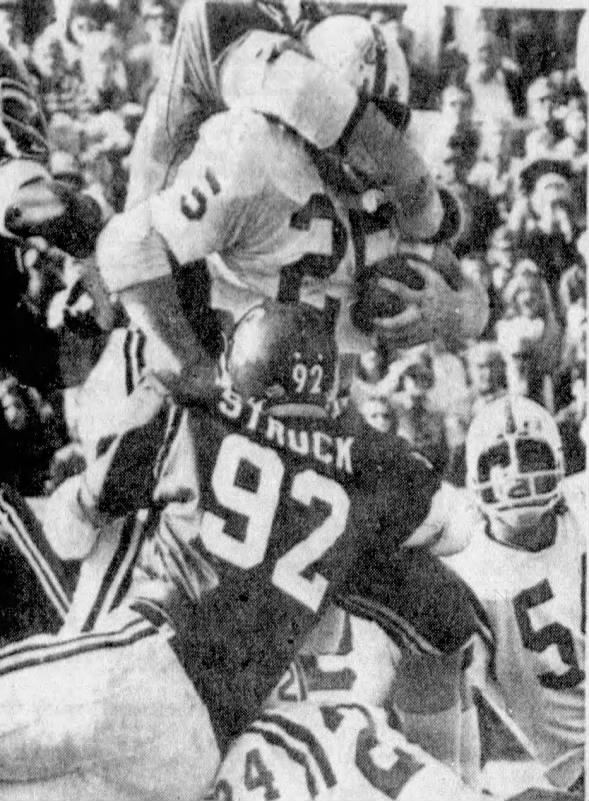 Nebraska’s offense never snapped the ball inside Sooner territory as Oklahoma flashed No. 1 credentials to everyone who cared to watch and clinched the Big Eight championship in a 27-0 blanking of the Huskers.

Nebraska had scored in 58 straight games, one short of the all-time Cornhusker record, but the Huskers wouldn’t get a sniff of the goal line in this one. Nebraska crossed the 50 only once, when Dave Humm passed to Larry Mushinskie for a 33-yard gain to the Oklahoma 33 late in the third quarter, but the Husker tight end fumbled and OU’s Durwood Keeton recovered.

In all, Nebraska got only 10 first downs, 74 yards rushing and 100 passing. About the only things on the positive side of the ledger for the Cornhuskers were Tony Davis gaining 41 yards rushing and pushing his season total to 1,008 to become the third Nebraskan to gain more than 1,000 yards in a season; and Rich Sanger’s 48.6 punting average on nine kicks for 438 yards, including boomers of 63 and 65 yards.

Joe Washington sprinted around right end and cut back for 34 yards to the Nebraska six in the first quarter and two plays later, Waymon Clark went over from the two for a 7-0 OU lead. Later in the period, Sooner Steve Davis started what was supposed to be a quarterback sneak on third-and-one, but he found himself wide open for a 47-yard TD run and a 14-0 lead at the quarter break.

Oklahoma added insult to injury late in the game when Davis passed 41 yards to Tinker Owens at the NU eight to set up the game’s final score. Davis kept for the touchdown on the next play and the Sooners had a 27-0 win to up their record to 9-0-1 as the Huskers fell to 8-2-1 and a second-place Big Eight tie with Kansas.