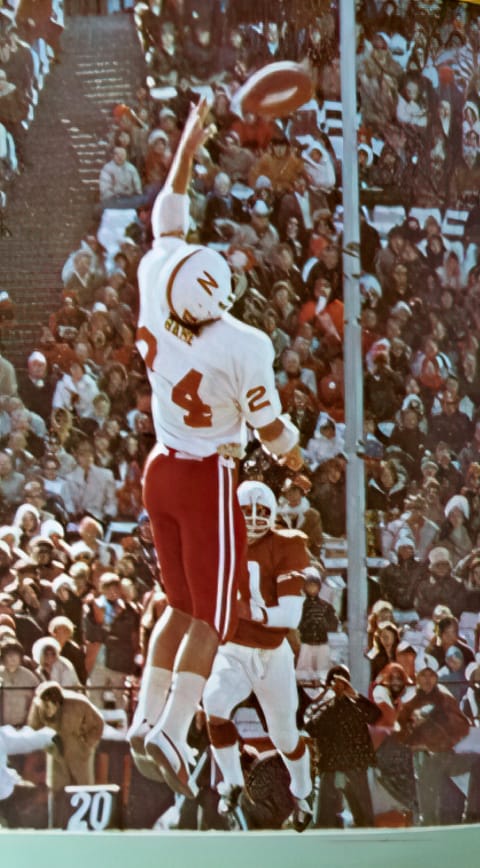 Tom Osborne’s Cornhuskers broke open a tight contest in the third quarter with a pair of game-breaker plays to chalk up a 19-3 win over Texas in the 1974 Cotton Bowl game.

The chilled New Year’s Day crowd saw the Big Eight’s runner-up and the Southwest Conference champions battle to a 3-3 tie at halftime, thanks to a brilliant Longhorn goal-line stand that stymied a 79-yard Husker drive just before the gun.

But the Huskers, led by alternate quarterback Steve Runty after halftime, weren’t to be denied. Midway through the third quarter, safety Bob Thornton returned a Texas field goal try 41 yards to set up the clinching touchdown. Ritch Bahe got the final 12 yards on a reverse to make it 10-3.

Four plays later, John Bell recovered a Texas fumble at the Longhorn 19, and three plays after that, Tony Davis ripped in from the three to make it 16-3. Sanger kicked a 43-yard field goal with 8:09 left to complete the scoring.

Texas had scored first on a 22-yard field goal by Bill Schott after a Husker fumble. Early in the second quarter, defensive end Steve Manstedt picked up a Roosevelt Leaks fumble in midair and raced 65 yards to the eight. But a stiff Longhorn defense held NU to a 24-yard field goal by Sanger.

The Huskers’ victory was a salve for the burns inflicted by Oklahoma (27-0) in the season finale.