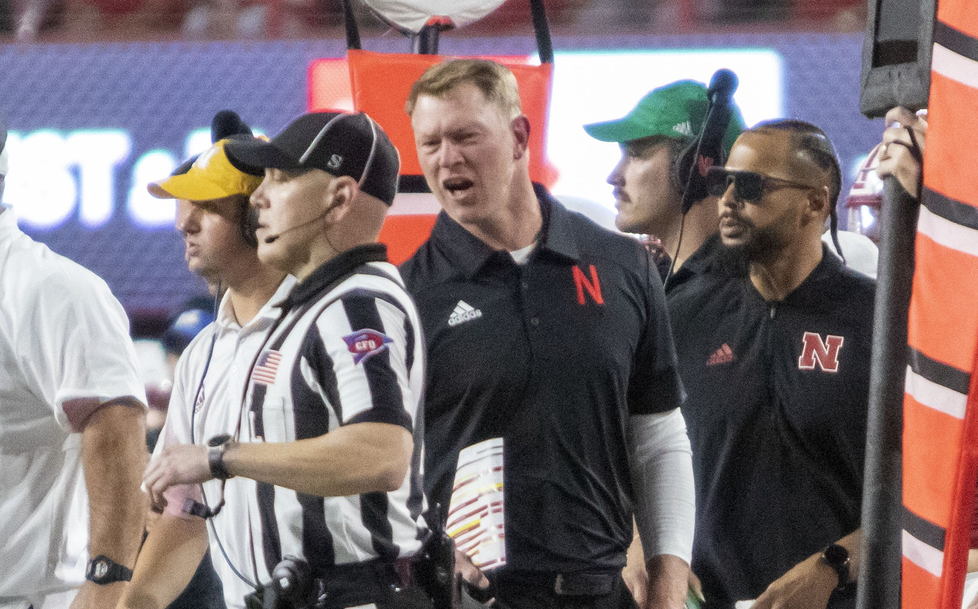 Scott Frost has some words for an official in the second quarter. | Kenny Larabee

In a hard-hitting, four-quarter battle, a late Nebraska fumble and the short field goal by Michigan that followed produced a narrow 32-29 margin for the No. 9 Wolverines to escape from Memorial Stadium.

Trailing 29-26, Michigan’s Jake Moody kicked his third field goal of the night from 31 yards out to tie game with three minutes left.

Nebraska took over, and on 3rd-and-1 from the NU 34, Martinez crossed the 35 and advanced to the 37. But he was stood up and stripped of the ball by Wolverine linebacker Brad Hawkins, who returned the fumble 19 yards to the Michigan 18.

The Blackshirts refused to break. Nebraska pushed the Wolverines back three yards, forcing Moody to boot his fourth field goal of the game, this time from 39 yards, to give Michigan a 32-29 lead.

Nebraska still had time to strike, taking over with 1:28 left and no timeouts. Martinez quickly hooked up with Samori Toure for a 25-yard gain to midfield. But the Huskers could push no farther, as Michigan forced a turnover on downs to end Nebraska’s hopes of an upset

The Huskers are on the brink. That can be exhilarating, or it can be emotionally exhausting.

Plenty of fanbases claim they don’t get the calls, but Nebraska might have a real case over the years. The head coach, though, won’t go there.

Nebraska played even with No. 9 Michigan. In a vacuum, that looks pretty good. In context, it stings like hell. One of these days, Nebraska has to win one of these, right?

This team is close, but the results in these games continue to be the same.

Somehow, some way, in a different way than the other ways, the Huskers failed to find a way to come out on top.

Big plays were hard to come by. But Frost and Martinez found them.

This is why you care. For classic nights like Nebraska-Michigan. But the Huskers keep coming up short. Devastatingly short.

There’s not much excuse for the Big Ten’s officiating work Saturday night.

These Wolverines have made it so that we can’t turn away. Nor should we.

Even after getting run through the spin cycle for much of the second half, it was Michigan’s defense that made arguably the biggest play.