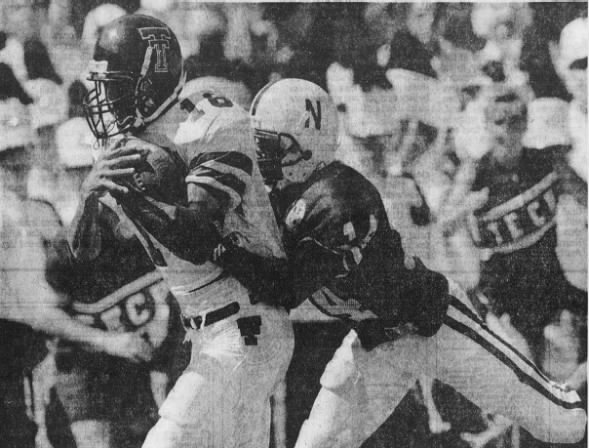 Tech’s Lloyd Hill scores on a 51-yard pass play despite the efforts of Barron Miles. · The Des Moines Register · Newspapers.com

Huskers pull away from Red Raiders

Nebraska passed for more than 200 yards for the second straight week en route to a 50-27 victory over the unranked but eventual bowl-bound Texas Tech Red Raiders.

Nebraska jumped out to a 10-0 lead, but the pesky Red Raiders put a test to the Huskers’ new 4-3 defense, as they crept back to a 20-14 halftime deficit, then took the lead on their second drive of the third quarter when they recovered a fumble on NU’s 26-yard line and scored from there.

But Nebraska scored on its next three possessions, and two sacks by Butkus Award winner Trev Alberts and a fumble recovered by Tyrone Williams on a kickoff squelched the Red Raiders’ upset plan.

Quarterback Tommie Frazier completed 12 of 28 passes for 206 yards with a TD strike to tight end Gerald Armstrong and also rushed for a score. Corey Dixon was Frazier’s favorite target, as the 5-foot-8 split end caught six passes for 116 yards. Placekicker Byron Bennett added three field goals, two of which were over 40 yards, and was successful on five PATs, but had one blocked, ending a streak of 43 consecutive kicks.

Alberts earned Big Eight Defensive Player of the Week honors as he led all tacklers with 11 stops, including four sacks for 21 yards in losses.

The Huskers totaled 534 yards, including 317 on the ground, to TTU’s total 323. Backup quarterback Tony Veland went down with a torn petellar tendon and would be lost for the rest of the season.

• Plucky Frazier did what he had to
• Scoring summary
• Photo page