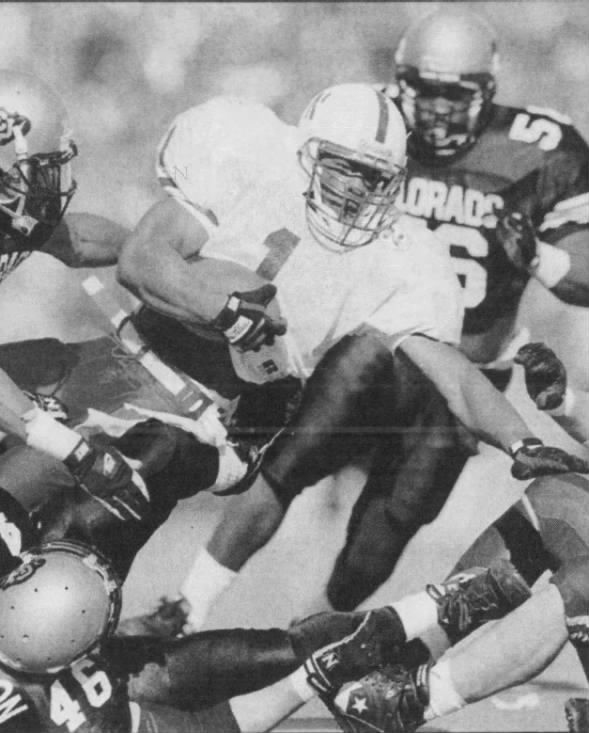 Huskers start fast, hold on for win in Boulder

The No. 6/4 (AP/coaches) Huskers jumped out to a 21-3 lead, then turned the game over to the Blackshirts, who provided a gutsy defensive stand to guide Nebraska to a 21-17 win over the No. 18/20 Colorado Buffaloes on a cold day in Boulder. It was NU’s second road win over a ranked team on the season.

Calvin Jones scored the Huskers’ first two TDs with runs of four and 10 yards but suffered from the flu and leg cramps and missed most of the last three quarters. Tommie Frazier led the Huskers, completing 6 of 13 passes for 133 yards and rushing eight times for 56 yards before injuring his right shoulder on a 26-yard gain early in the third quarter. He was taken to the locker room twice to be checked by doctors but returned to the game two more times as the offense stalled on its last eight possessions with an interception on the CU 9-yard line and two missed field goals.

Frazier accounted for 236 total-offense yards, his third straight game with over 200, and was named Nebraska’s ABC/Chevrolet Player of the Game.

The Blackshirts came up with three crucial interceptions in the second half. John Reece’s pick ended Colorado’s hopes on its last possession at the NU 40.

Toby Wright led the team in tackles with 13, but outside linebacker Trev Alberts earned Sporting News Defensive Player of the Week honors as he totaled 10, including two sacks, and had six quarterback hurries. NU’s swarming defense forced CU quarterback Kordell Stewart to miss on 22 of 28 passes and to suffer through four sacks and 13 QB hurries.

H’MAX NOTES: Corey Dixon had two big plays for the Huskers in the first quarter: a 68-yard punt return and a 60-yard touchdown reception.