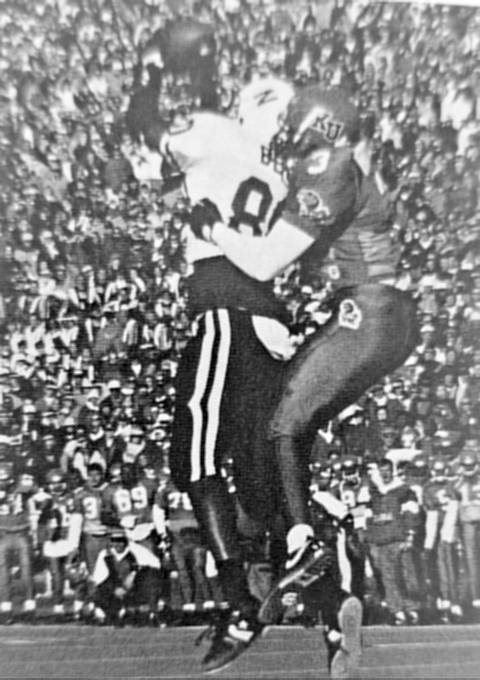 Trumane Bell got the ball into the end zone on this fourth-quarter catch. | Courtesy of Nebraska Athletics

Nebraska’s 1,000th game and 100th against Kansas went down to the wire in Lawrence as the Huskers thwarted a KU 2-point attempt with 52 seconds remaining to preserve a 21-20 win.

Nebraska missed early opportunities to put the Jayhawks away but recorded its fourth come-from-behind victory of the season.

After KU scored first, NU answered with a 4-yard rushing TD by Calvin Jones and an 8-yard TD pass from Tommie Frazier to Gerald Armstrong.

NU was moving the ball decisively and looked to go into halftime with a comfortable 21-7 lead as QB Brook Berringer took the reins of the Husker attack while Tommie Frazier rested a sore shoulder. But after marching 77 yards to the KU 6, Berringer threw an interception in the end zone.

Kansas played Nebraska’s game of ball control and used up 10:08 in the third quarter and scored with 1:10 remaining to tie the game at 14-14.

After an exchange of possessions, the Huskers’ Calvin Jones broke loose for a 51-yard run to set up the play of the day for NU — a 10-yard TD strike from Frazier, under pressure, to tight end Trumane Bell, who pushed his way into the end zone in double coverage.

But KU answered with a 17-play, 80-yard drive, only to miss under pressure on a 2-point conversion pass in the final minute.

Jones tallied 195 yards, including 96 in the fourth quarter, despite fighting a virus all week.

Linebacker Mike Anderson led the Husker Blackshirts with 12 tackles, while Trev Alberts had 11. Alberts’ streak of 10 games with at least one sack ended, but he did have a tackle for a loss and three hurries.