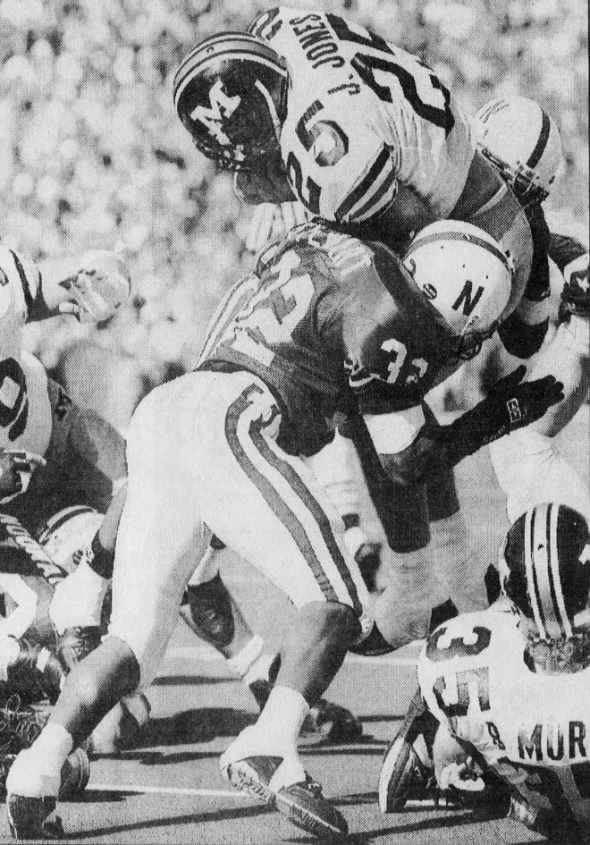 Nebraska put together its most complete game of the season to date and improved its record to 7-0 as the Huskers defeated the Missouri Tigers, 49-7, in Lincoln.

After a scoreless first quarter, Nebraska in the second period put 21 points on the board including two TDs by I-back Calvin Jones on a 4-yard run and a 55-yard reception from Tommie Frazier. The stat sheet credited Nebraska with its fourth 500-plus day as the Huskers tallied 539 yards, including 340 rushing to Missouri’s 172 total, including 68 on the ground.

Nebraska committed two turnovers, one of which Missouri converted to a score, while the Tigers did not turn the ball over.

Jones recorded his third consecutive 100-yard rushing day with 129 yards and two scores, while Frazier added 81 on the ground and completed 8 of 13 passes for 143 yards and two TDs. He threw his second interception of the year, the first in four games and first in 61 attempts, but for the second straight week accounted for over 200 yards of total offense with 224 yards.

Trev Alberts again led the defense with 10 tackles, his fifth double-figure day, and added two sacks to his career-record total.

Nebraska got a much-needed total performance going into the matchup with nationally ranked Colorado but could certainly have done without the two major injuries to offensive linemen Brenden Stai (starting right guard) and Jon Pedersen (backup center/snapper). Both linemen broke fibulas and were lost for the remainder of the regular season.