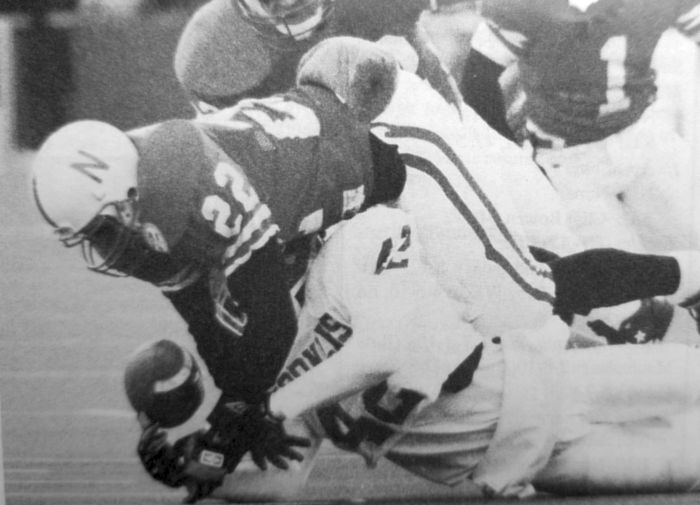 David Seizys recovers the ball after Mike Minter caused a fumble on a fourth-quarter kickoff return, leading to Nebraska’s second TD in a 13-second span. | Courtesy of Nebraska Athletics

In a classic Nebraska-Oklahoma shootout, the Huskers, No. 1 in the coaches and bowl polls and No. 2 by AP, hosted the No. 15/16/16 Sooners in a post-Thanksgiving matchup. A subzero wind chill inhibited both teams to under 100 yards passing, but the Huskers came through with the big plays and took advantage of four OU turnovers en route to a 21-7 victory.

Nebraska was forced to punt on its first three possessions, then gave up an interception on its fourth drive, before quarterback Tommie Frazier scored on a 2-yard run to tie the score 7-7. The 15-yard drive was set up by Toby Wright’s 25-yard interception return.

The score remained deadlocked until the fourth quarter when the Huskers’ nine-play drive culminated with an 11-yard touchdown pass from Frazier to Abdul Muhammad with 13:20 remaining. On the ensuing kickoff, native Oklahoman Mike Minter caused a fumble, which David Seizys recovered to give the Huskers the ball on the OU 20. I-back Calvin Jones scored on the first play from scrimmage to put NU up 21-7.

The Husker defense put the stop on the Sooners’ offense in the second half. After Oklahoma missed a 44-yard field goal on its first drive of the third quarter, the Sooners gained only seven total yards on their next four possessions.

Nebraska’s 179 yards of total offense was the lowest output in a win during the Tom Osborne era while the Huskers put together their fifth come-from-behind victory. The win kept the Huskers in the hunt for a national championship game and gave NU its first perfect regular season since 1983.