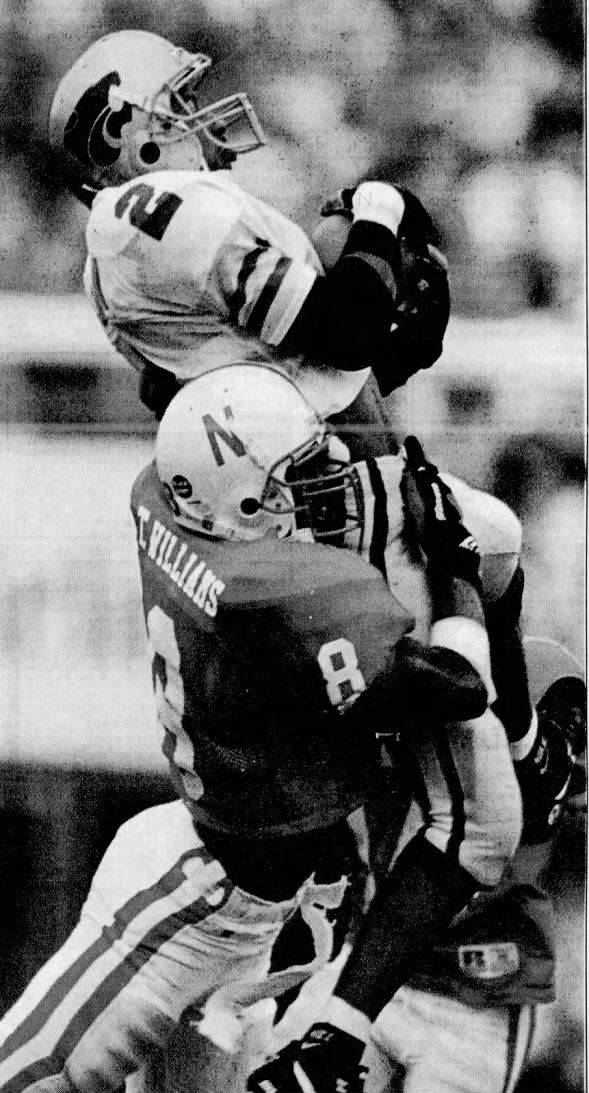 Huskers prevail in shootout with Wildcats

It was a wild game from start to finish as NU’s 192nd consecutive sellout crowd saw over 1,000 yards of total offense. Nebraska was outyarded, 565 to 545, and gave up a Big Eight record 489 yards passing to KSU quarterback Chad May, but picked off two passes and recovered one fumble and converted all three KSU turnovers into scores.

K-State tied the score twice in the first half, answering NU’s two touchdowns with two of its own, but Nebraska scored two more and Byron Bennett added a 48-yard field goal to give the Huskers a 31-14 halftime lead.

The Wildcats were the only team to score in the third quarter and added another with 7:44 remaining in the fourth to close the gap to 31-28, but Nebraska scored twice more in the last six minutes for the 45-28 final.

Outside linebacker Trev Alberts continued his streak of sacks in every game and set the NU career record with 24½. Ed Stewart tallied 11 tackles, while John Reece and Ernie Beler each had 10. Beler and Tyrone Williams each picked off a pass.

The victory extended the Huskers’ NCAA record for consecutive winning seasons to an unprecedented 32. Kansas State finished 8-2-1, ranked in the top 20 and went on to win its second bowl game in school history.