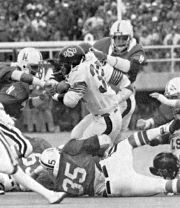 Two Craigs
too much for ’Pokes

Craig Johnson gained over 100 yards for the second straight week and scored three touchdowns to lead the Huskers to a 48-7 win over Oklahoma State.

Nebraska took the opening kickoff and drove 80 yards to score on a 13-yard pass from Jeff Quinn to Jeff Finn. On the day, the Huskers rolled up 560 yards, including 430 yards on the ground. Sophomore I-back Roger Craig gained 69 yards on 10 carries and scored two touchdowns.

The Blackshirts held the Cowboys to a minus-13 yards rushing and a total offensive production of 143 yards but had their string of quarters without a score broken. Jimmy Williams and Russell Gary led the team defensively with 11 and seven tackles, respectively.