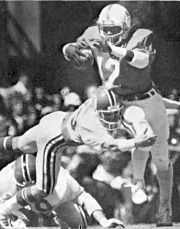 Led by I-back Jarvis Redwine, Nebraska rolled over Utah 55-9, in the season opener. Redwine rushed for 179 yards on only 17 carries to highlight a day that saw NU roll up 672 yards in total offense, including 545 on the ground.

Redwine scored three TD’s, including a 67 yarder, before turning the rushing chores over to Craig Johnson and Roger Craig in the middle of the third quarter. In all, fifteen Huskers carried the ball en route to the second highest rushing total in NU history.

Jeff Quinn added 127 yards passing while the defense had little trouble with the scrambling tactics of Utah quarterback Ricky Hardin. Three turnovers (one fumble and two interceptions), helped thwart any serious threat by the Utes.