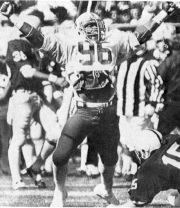 Playing in front of the largest crowd to see a football game at Penn State and a national television audience, Jarvis Redwine and the Huskers continued to drive toward higher national rankings as they slugged out a tough 21-7 victory over the Nittany Lions.

Redwine rushed for 189 yards to increase his national rushing lead, but this was a day that belonged to the defense. Led by blitzing ends Derrie Nelson and Jimmy Williams, the Blackshirts dropped quarterbacks Jeff Hostetler and Todd Blackledge nine times for 89 yards in losses. The Penn State ground game was limited to 33 net yards rushing, and the constant pressure by the NU forward wall forced seven turnovers, which thwarted any comeback for the Lions.

Offensively, the Huskers were again led by Redwine, who carried the ball a career-high 34 times and scored twice.