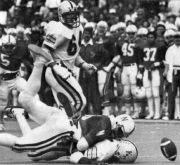 Jimmy Williams had two sacks for 31 yards in losses.

Nebraska fans were treated to an offensive show as the Huskers defeated Kansas State, 55-8.

Sophomore Roger Craig stole the spotlight from his celebrated teammate Jarvis Redwine by blitzing the Wildcats for 183 yards on just 9 carries. In all, 18 Huskers carried the ball in a ground assault that netted 495 yards.

Jeff Quinn threw for three scores and combined with two other quarterbacks for another 195 yards through the air to give the Huskers a total of 692 yards for their day’s effort.

While the offense was piling up the yardage and points, the defense was making life miserable for KSU quarterbacks.

Wildcat starter Darrell Dickey had to leave the game early in the second quarter with bruised ribs. For the day, Dickey and his backup were thrown for a total of 67 yards in losses.

Leading the charge for the Blackshirts was Jimmy Williams, who blitzed in from his defensive end position to record a pair of sacks good for 31 yards in losses.