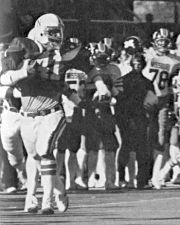 Kim Baker heads for the end zone after intercepting a Phil Bradley pass.

It was a typical Nebraska-Missouri game, plenty of offense and key defensive plays, but when the smoke cleared the Huskers had downed Mizzou 38-16. It marked the first time since 1972 that Nebraska had beaten the Tigers in Lincoln.

Jarvis Redwine (129) and Andra Franklin (122) both went over the 100-yard mark while the defense came up with enough big plays to neutralize the Big 8’s career total offense leader, Phil Bradley.

The biggest play of the day belonged to Nebraska’s Kim Baker, who returned a second-quarter interception 77 yards for a touchdown.

The Huskers won despite committing six turnovers to the Tigers’ two.