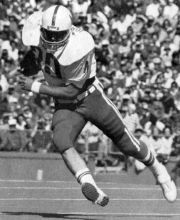 Nebraska, looking to get back on the winning track after losing to Florida State scored a convincing 54-0 win over Kansas in the 1980 Big Eight opener.

The Huskers were never threatened as they scored on five of six first-half possessions to jump out to a 33-0 halftime lead. With Craig Johnson scoring two touchdowns on 109 yards rushing and Roger Craig gaining 85 yards while scoring three times, the Husker running game rambled for 389 yards. Nebraska completely dominated the game offensively pilling up 520 total yards.

In place of Jarvis Redwine, Johnson continued his dominance against the Jayhawks. In 1978, Johnson ran through the Kansas defense for 192 yards and added 138 in 1979.