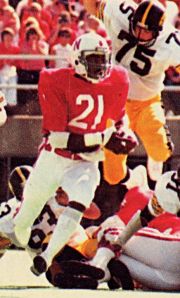 Roger Craig rushed for 78 yards and two touchdowns against his home-state school.

It was billed as a battle between the nation’s two leading rushers, but it didn’t take long for Jarvis Redwine and the Nebraska defense to prove who was No. 1 as the Huskers downed Iowa 57-0.

The battle between NU’s Redwine and Iowa’s Jeff Brown was summed up on their first carries of the day. Redwine sprinted 69 yards for a touchdown with only 1:17 gone, while Brown was stopped for a three-yard gain. Brown needed the entire game to pick up 51 yards (on 15 carries), while Redwine left early in the third quarter after piling up 153 yards on 12 attempts.

Reserve Husker I-back Roger Craig scored a pair of touchdowns against his home-state school in addition to 78 yards rushing.

The Blackshirts allowed Iowa to cross into Nebraska territory only twice all afternoon and held Iowa’s ground game to 44 net yards.