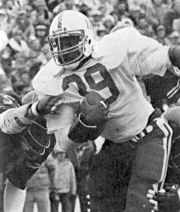 After leading only 14-0 at the half, Nebraska added 21 second half points to shut out Iowa State 35-0.

The Huskers led by just 7-0, but with 2:28 left in the first half, Nebraska’s Scott Gemar punted to the ISU five yard line, where the ball was caught and returned by ISU’s Joe Brown. Brown was hit by several Huskers and fumbled back into the end zone, where the ball was recovered for a touchdown by Mike Mandelko to give NU its 14-0 halftime lead.

The Huskers tallied three more times in the second half to wrap it up – Jeff Quinn’s one-yard run, Tim McCrady’s 22-yard pass from Quinn and a three-yard run by Roger Craig.