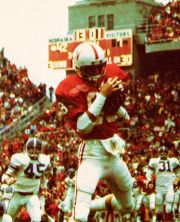 With the Black Shirts holding TCU’s ground attack to a mere 16 yards, the Cornhuskers stormed past the Texans, 56-14. The Huskers scored early and often, while the defense allowed only one TD.

TCU made it 14-7 in the second quarter thanks to a 21-yard TD pass from Jimmy Dan Elzner to Mike Renfro, but the Huskers exploded for two quick touchdowns after a fumble recovery and a pass interception to lead 28-7 at halftime.

After Nebraska got a 49-7 lead in the fourth quarter, Darryl Lowe intercepted a Vince Ferragamo pass and ran 70 yards to score. But NU reserves came right back with a 70-yard drive to account for the final score.

It was win No. 3 for the highly rated Huskers, and they outyarded TCU, 517-169. Both Terry Luck (three) and Ferragamo (one) tossed TD passes to complement the 323-yard Husker rushing attack. Nebraska scored twice in every quarter, with seven different players logging touchdowns.