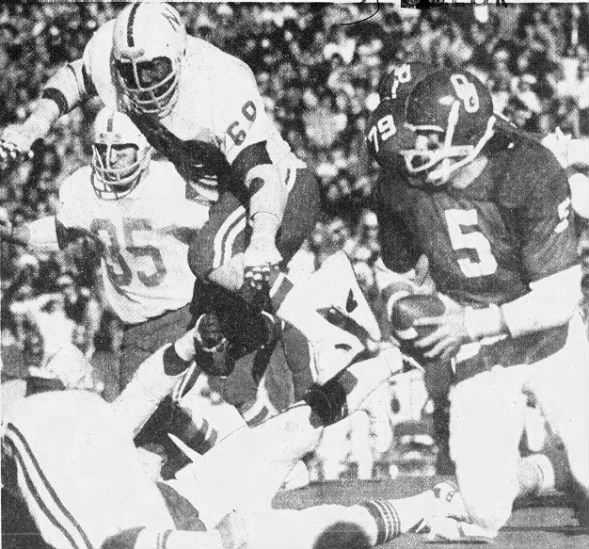 Oklahoma, scoring on five of six Nebraska turnovers, defeated the Huskers 35-10, giving the Sooners a share of the Big 8 title with Nebraska and enabling OU to represent the conference at the Orange Bowl.

It was close throughout the first half, with Oklahoma taking a 7-3 lead into the locker room, but it was the second half of play, particularly the fourth quarter, that spelled doom for NU.

Early in the third period, Nebraska capitalized on a Sooner fumble and Monte Anthony scored from the one to give the Huskers a 10-7 lead. But just as NU capitalized, so did Oklahoma, recovering a Husker fumble late in the third and driving for a touchdown and a 14-10 lead.

Oklahoma sealed its win early in the fourth when Nebraska fumbled a punt at the Husker 13. The Sooners scored three plays later to make it 21-10. Nebraska committed two more turnovers, both resulting in Oklahoma scores, and the Sooners were off to the Orange Bowl with a 35-10 win.

The day after the game, Husker players voted to accept a Fiesta Bowl invitation. This was a change of heart from a week earlier, when the Huskers voted to go to no bowl if they didn’t beat Oklahoma and get an Orange Bowl berth. (Coach Tom Osborne was among those miffed that Alabama coach Bear Bryant had pulled strings to ensure that the Oklahoma-Nebraska loser would not go to the Sugar Bowl, which invited a two-loss Penn State team instead to play the Crimson Tide.)