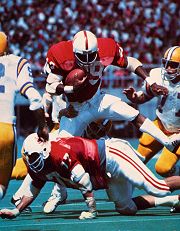 Nebraska opened the 1975 season without a number of key players, but the Huskers pulled out a 10-7 victory over stubborn Louisiana State.

NU got on the board first with a pass from Terry Luck to Bobby Thomas, a five-yard flip late in the first half. Mike Coyle’s 37-yard field goal gave Nebraska a 10-0 lead with 5:23 left in the third quarter. LSU stormed back to score just before the quarter ended, and then the two defensive units staged a fourth-quarter standoff.

The Huskers went into battle without All America Rik Bonness (injury) and four players ruled ineligible for the game by the NCAA – Jimmy Burrow, Ray Phillips, Vince Ferragamo and Dean Gissler. It was also the first time all members of the Cornhusker squad were unable to suit up, thanks to a new NCAA rule limiting the squad to 60 in suit.

While it wasn’t a high-scoring affair, Nebraska – with a new quarterback, a rebuilt defense and an offensive line that had never started a game together – proved it could win a close one, and 1975 opened on a victorious note.