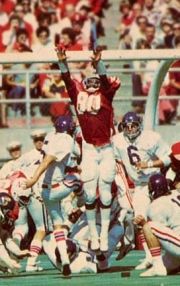 Ray Phillips blocks KU’s field goal attempt at the end of the first half.

Behind a great Black Shirt defensive effort that halted Kansas’ wishbone and quarterback Nolan Cromwell, Nebraska opened the Big 8 season with a 16-0 win over the Jayhawks.

It was a defensive struggle throughout, with Kansas’ defenders holding the Huskers to two first-half field goals. KU threatened to score at the end of the half, when the Jayhawks tried a 24-yard field goal with one second left. But as the ball sailed towards the uprights, NU defensive end Ray Phillips blocked the kick, giving the Huskers a 6-0 halftime lead.

The Huskers scored another field goal in the third period and added a final touchdown in the fourth, behind the passing of Terry Luck, who came in for starter Vince Ferragamo.

The Black Shirts held KU to 121 yards rushing and limited Cromwell to 62 yards on 19 carries. Overall, the Jayhawks could generate only 177 total offensive yards.

Nebraska, now sporting a 5-0 mark, took to the road for the first time in 1975 to face the fierce Oklahoma State Cowboys.