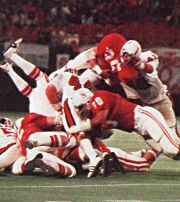 Two back-to-back third-quarter touchdowns moved Nebraska from a 24-14 deficit to a 27-24 victory over the Texas Tech Red Raiders in the 1976 Astro-Bluebonnet Bowl.

Those two TDs came on an 18-yard run by Rick Berns and a 23-yard Vince Ferragamo-to-Chuck Malito pass. The touchdown pass was set up by a partially blocked Texas Tech punt by Kent Smith and Ted Harvey.

With Nebraska ahead by 27-24 entering the fourth quarter, the game was far from over. Twice before in ’76 – against Missouri and Oklahoma – the Huskers saw fourth-quarter leads vanish. But the third time was the charm for Nebraska.