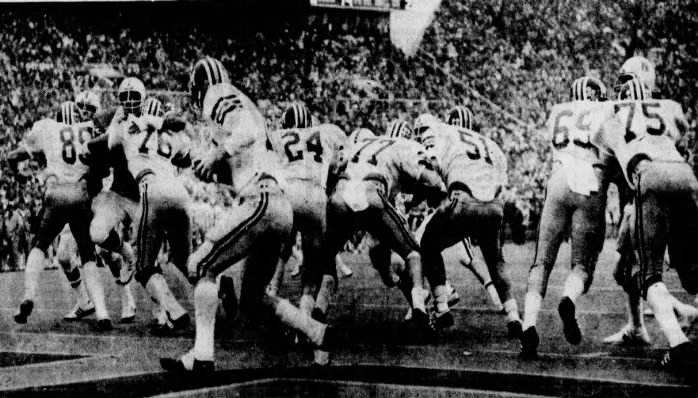 The longest pass in Big 8 history toppled the Nebraska Cornhuskers from the undefeated ranks and dashed their hopes of a No. 1 ranking.

Leading Missouri 24-23, the Huskers kicked off to the Missouri 10 yard line. Two plays and one penalty later, the Tigers were pushed back to their own two yard line, and the Black Shirts looked certain to contain Mizzou and lead NU to their sixth victory of the year. However, Missouri quarterback Pete Woods had other plans in mind. Faking a handoff into the line, Woods passed the ball 98 yards to Joe Stewart for a touchdown. A two-point conversion made the score 31-24.

Missouri then held back a struggling Nebraska team to win 34-24.

Vince Ferragamo had an excellent day passing; he completed 13 of 22 for 191 yards.

Larry Valasek blocks a Mizzou punt in the first quarter. Kent Smith covered the ball in the end zone for Nebraska’s first touchdown.