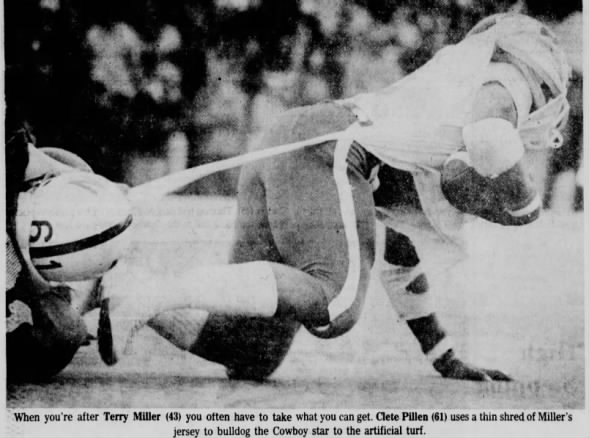 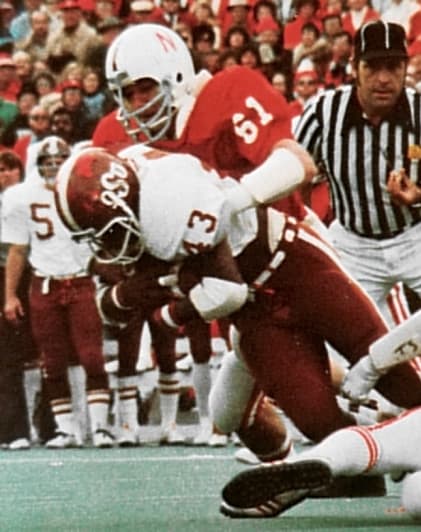 Clete Pillen, who had 30 tackles, takes down OSU’s Terry Miller.

There it was, two nationally ranked teams meeting for that week’s Game of the Year, Nebraska and Oklahoma State battling in a nail-biting fight to the finish. The teams came into the game tied for the Big 8 lead at 3-1. In the end, it was Nebraska’s co-captains, Clete Pillen and Vince Ferragamo, who made the difference.

Pillen was all over the field making tackles. He made 30 in all and was named Big 8 Defensive Player and Associated Press National Defensive Lineman of the Week for his performance. As coach Tom Osborne said, “We would have lost without Pillen.”

Ferragamo’s passing arm untracked a stalled offense in the second half.

Nebraska dominated the first quarter, but two turnovers kept the Huskers from scoring. Oklahoma State held the ball for all but eight plays in the second quarter but managed only a field goal.

Trailing 3-0 in the third quarter, Ferragamo went to work. Starting at the Nebraska 25, Ferragamo hit end Chuck Malito on three passes of a seven-play drive, the final pass being a 34 yard touchdown.

Oklahoma State came right back behind Terry Miller to go ahead 10-7.

Again it was Ferragamo — hitting four of four passes and rushing for 11 yards on Nebraska’s next possession — who led the Huskers to a final score, a six-yard pass to Ken Spaeth.