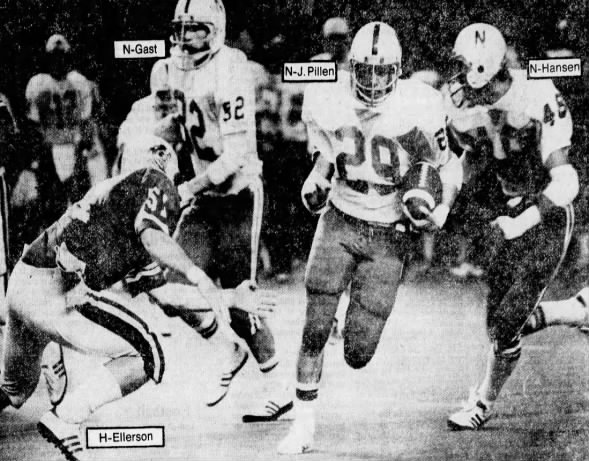 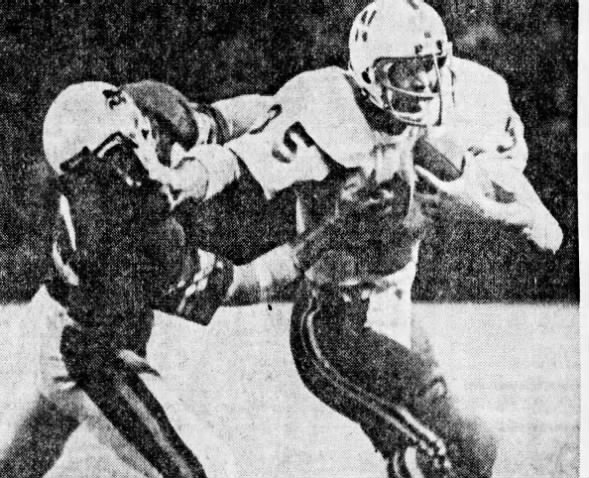 Richard Berns stiff-arms a defender as he picks up some of his record-setting 211 rushing yards. · Honolulu Advertiser · Newspapers.com

Over 18,000 Nebraskans traveled 3,000 miles to see Nebraska play the University of Hawaii, and cheered on the Huskers as they destroyed the hapless Rainbows 68-3.

Four long-standing Nebraska offensive records were shattered in the contest.

The Cornhuskers accumulated 655 total yards, more yardage than any NU team had ever piled up in one game. The 428-yard performance on the ground and 227 yards garnered in the air was a fine tuneup for the Cornhuskers, anticipating a Dec. 31 showdown with Texas Tech in the Astro Bluebonnet Bowl.

Second, Richard Berns rushed for 211 yards on his way to four touchdowns, eclipsing the single-game rushing mark of 204 yards set by Frank Solich in the 1965 Air Force game.

Third, Vince Ferragamo tossed his 19th and 20th touchdown passes of the year, breaking David Humm’s 1972 record of 18 touchdown passes in one season. Ferragamo’s first TD strike came with 12:46 left in the first quarter on a 43-yard pitch to Bobby Thomas. The second was a 65-yard pass to Chuck Malito.

The fourth record belongs to Malito, who had more yards in pass receptions in one game than any other NU receiver in history. Malito caught four passes for 166 yards.

While the offense was setting records, the Black Shirt defense was busy limiting the Rainbows to 205 total yards. Hawaii crossed midfield only twice and managed their only score on a 43-yard field goal in the third quarter.