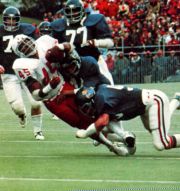 Huskers bounce back against Jayhawks

One week after being upset by Missouri, Nebraska traveled to Lawrence to take on the Nolan Cromwell-less Kansas Jayhawks and returned with a 31-3 win thanks to another solid Black Shirt effort and a well-balanced offensive attack.

In front of 58,050 fans, the Black Shirts allowed Kansas across midfield once in each half. Kansas scored on a 42-yard field goal midway through the final frame.

Linebacker Clete Pillen led the defense with 12 tackles after playing much of the season with a bad ankle. The pass defense shined as Kansas completed only one of eight passes for 14 yards and had one interception.