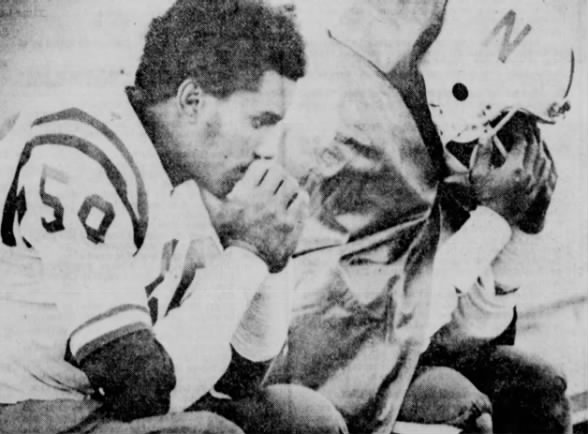 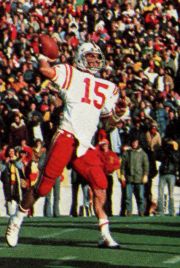 Vince Ferragamo and the Huskers were forced to the air as the ground game sputtered.

Iowa State, capitalizing on eight Nebraska fumbles and one interception, beat the Huskers for the first time in 16 years 37-28, thus setting up a photo finish in the Big 8 race.

Like a premonition of bad things to come, Iowa State drove 94 yards on their second possession to score on a 21-yard field goal. On the following kickoff, Nebraska’s Byron Stewart fumbled, and Scott Cole recovered for the Cyclones. Seven plays later, the score was ISU 10, NU 0.

Not content to sit on their 20-13 halftime lead, Iowa State attacked Nebraska on the ground, grinding out 321 yards while holding the Huskers to only 77. A stunned Nebraska had to resort to the pass to move the ball. Vince Ferragamo hit 12 of 27 passes for 199 yards, and split end Bobby Thomas caught four of those for 107 yards, including touchdown strikes of 43 and 30 yards.

But NU’s aerial bombardment was not enough to turn back the Cyclones. In the fourth quarter, a Nebraska fumble and interception resulted in two ISU scores that gave them a 37-20 lead. Nebraska scored once more to make the final 37-28.

The loss clouded the post-season bowl picture in the Big 8. NU would have clinched a tie for the Big 8 crown with a win, but instead the showdown with Oklahoma would decide the Orange Bowl representative.