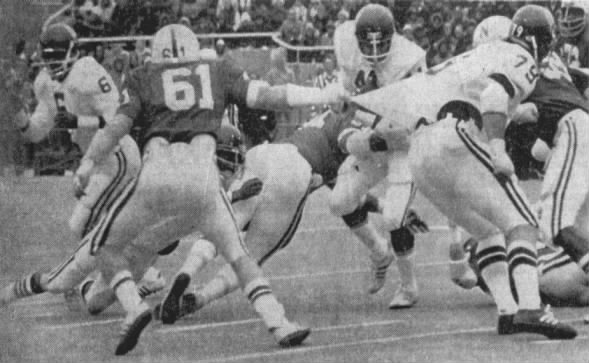 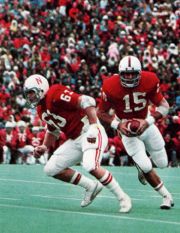 Leading the Sooners 17-13 with less than four minutes remaining in the game, the Huskers lost 20-17 on two razzle-dazzle plays seldom seen from the conservative wishbone attack – forward passes. With 3:30 left in the game, OU quarterback Thomas Lott handed off to Woodie Shepard, who pulled up and threw a 47-yard bomb to split end Steve Rhodes. The play moved the ball from the Oklahoma 16 yard line to the Nebraska 35.

Then, on third and 19, quarterback Dean Blevins passed to Rhodes, who lateraled to Elvis Peacock coming around the left side. Peacock carried 32 yards to the 2 yard line, and scored on the next play. His touchdown, which came with 38 seconds left in the game, sealed the contest in favor of the Sooners, the team Nebraska hasn’t beaten since the “Game of the Century” in 1971.

The two passes were OU’s only attempts in the game, and covered a total of 79 yards. Nebraska, on the other hand, passed nine times for 143 yards. However, the Cornhuskers’ two touchdowns came on the ground, the first a nine yard burst by Curtis Craig and the second a four yard rush by Rick Berns.