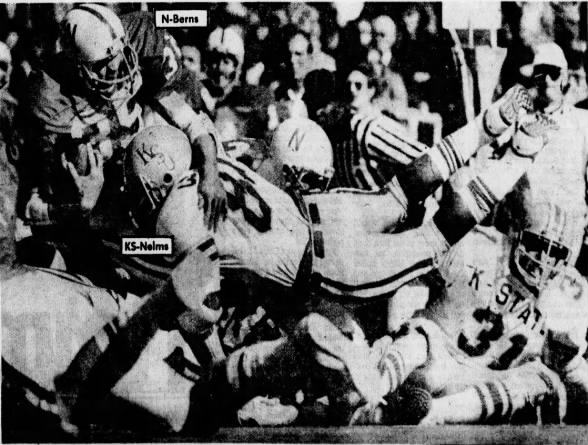 Still hurting from the last two battles, an injury-riddled Nebraska team put up a super defensive effort and emerged with a 51-0 win over Kansas State in front of 76,150 Nebraska fans.

The first play of the game was a sign of things to come when George Andrews forced a K-State fumble and Ron Pruitt recovered for the Huskers. Al Eveland kicked a 20-yard field goal, and the scoring circus was on.

Meanwhile, the Nebraska defense was setting a school record by holding Kansas State to minus-45 yards rushing. The Wildcats did not cross midfield until late in the third quarter when they picked off a Vince Ferragamo pass.

While Kansas State was having trouble getting out of its own backfield, Nebraska rolled up 186 yards passing and 289 yards rushing as 15 players carried the ball for the Huskers. Ferragamo tied the school record for touchdown passes the second time this season with TD strikes to Ken Spaeth, Mark Dufresne, and two to Bobby Thomas. Ferragamo hit on 14 of 25 passes for 173 yards.

Leading the defense was senior Mike Fultz with ten tackles, one for a 19-yard loss in which he forced and recovered a fumble.

Coach Tom Osborne used close to 80 players in the contest.