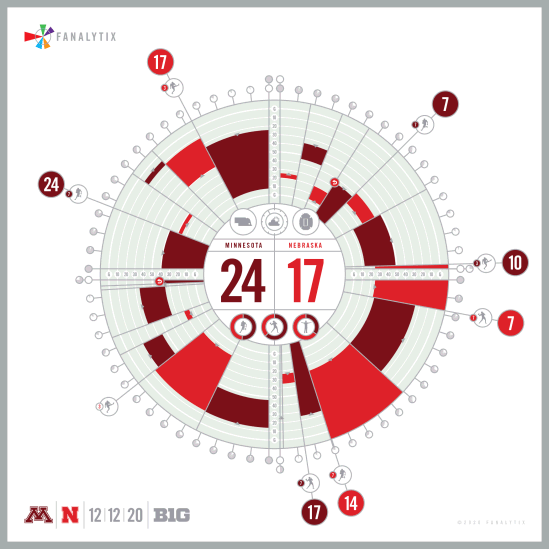 Nebraska could not recover from a slow start as short-handed Minnesota worked its way to a 24-17 win over the Huskers at Memorial Stadium.

In a game that often lacked flow, Minnesota took advantage of a tipped pass that resulted in an interception by Tyler Nubin to set the Golden Gophers up with a short field. Four plays and 35 yards later, Minnesota took a 7-0 lead on a Mohamed Ibrahim 26-yard touchdown run with 7:26 left in the first quarter.

The Gophers added a 31-yard Anders Gelecinskyi field goal near the end of the first quarter to take a 10-0 lead to the second.

Nebraska took the lead with a pair of second-quarter touchdowns but was kept out of the end zone the rest of the way.

Huskers.com
Nick Henrich with a tackle

Few societies known to man have shown as much propensity to erase signs of their own advancement as Frost’s offensive platoon.

The coach is correct that the play-caller is only as good as the execution. But it’s his job to put the players in the best position to execute, too.

Where have you gone I-back? It needs to become a central part of this Husker offense again.

The Gophers played keep-away from a bad offense. Frost played into Minnesota's hands by playing fast and getting nowhere.

Nothing went right for NU's passing game other than maybe the touchdown pass to a wide-open Austin Allen. Everything else felt forced, off, or predictable.

There seems to be a power in being at peace with what you are and aren’t. It’s one Nebraska’s still searching for.

Frost must fix this offense before August 2021. ... He has to find a way. He can’t put his fans through another fall like this.

At a certain point, there’s only so much talk about progress, a changed culture and good weeks of practices that a fanbase can tolerate